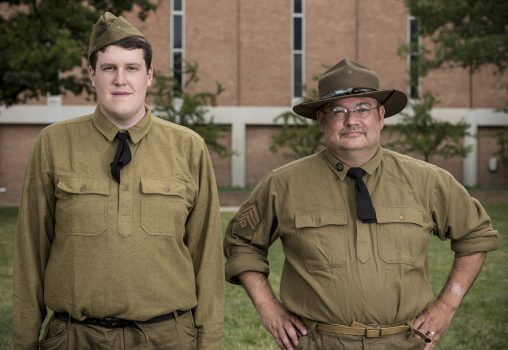 Zach Jett, left, a graduate student in the War and Society concentration, and Paul Lockhart, a history professor, will represent Dayton soldiers who enlisted in World War I during in a commemoration ceremony on July 15. (Photos by Matt Helton)

Wright State history students and their professor will represent American soldiers during an event commemorating the centennial of a group of Daytonians preparing to fight in World War I.

Graduate students in the War and Society concentration, offered by the Department of History in the College of Liberal Arts, will participate in a ceremony marking the gathering of 200 Dayton men at Camp Triangle to begin their military service in Battery D, 1st Ohio Field Artillery.

The commemoration takes place Saturday, July 15, from 10 a.m. to 5 p.m. at the site of the encampment at Dayton’s Triangle Park. The event is free and open to the public.

The event will include a living history encampment of life at Camp Triangle with demonstrations of military life; a talk on the French 75 artillery gun widely used during the war, one of which is located on the Ridge Avenue Bridge adjacent to Triangle Park; and a ceremony to honor Daytonians who served in World War I.

Paul Lockhart, a history professor and Brage Golding Distinguished Professor of Research at Wright State, will also lecture on Battery D and Dayton. 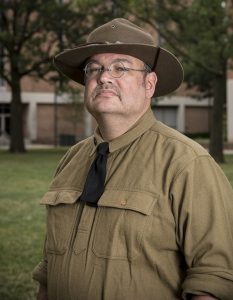 Paul Lockhart has focused his research in recent years on how World War I impacted Dayton, including organizing an exhibit at Carillon Historical Park.

The war had a significant impact on Dayton. Thousands enlisted and fought in Europe, local businesses made unique and important contributions to the war effort, and the community emerged from the war wealthier and larger.

Daytonians enlisted in Battery D immediately after the United States declared war in the spring of 1917, and then on July 15, 1917, marched out in their civilian clothing to Triangle Park, which was called Camp Triangle. The soldiers eventually trained at Camp Sheridan in Montgomery, Alabama.

“For almost six weeks, the men were introduced to some of the very basics of soldier life,” Lockhart said.

They learned how to salute, march and signal with semaphore flags and go through physical training. Although Battery D was an artillery unit, the soldiers didn’t have cannons to practice with.

“They don’t even get to touch a cannon until February of the next year when they were in Alabama training,” Lockhart said.

During the commemoration, Wright State graduate history students will dress as American soldiers with equipment and as civilians in period clothing. The students will demonstrate what they learned in Lockhart’s Living History course by representing what life was like at Camp Triangle, through cooking and washing dishes, semaphore training with signal flags, physical training and drills.

“One of challenges of living history is to make the history accessible, to make it so people can actually relate to it,” Lockhart said.

The Living History course introduced students to living history, re-enacting and the difference between the two.

The event is sponsored the DeWeese Ridgecrest Civic Association and the War and Society Program in Wright State’s Department of History, with funding provided by a City of Dayton Neighborhood Mini-Grant.