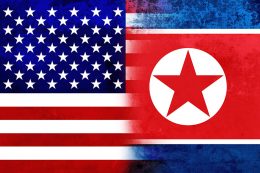 The discussion, “Is It Just Bluster, Insults and Threats? What to Make of U.S.–North Korean Relations?,” will take place Tuesday, Oct. 17, at 3:30 p.m. in the Discovery Room (163) of the Student Union. The talk is open to the campus community and the public.

The discussion will feature a multidisciplinary panel of experts with wide-ranging interests and experience. Each panelist will provide comments, followed by a question-and-answer discussion.

“Given the escalating tensions between the U.S. and North Korea — and the gravity of the threat of war — we have pulled together some of the expertise on campus to invite questions and discuss what to make of the situation,” said December Green, professor of political science and chair of the School of Public and International Affairs.

Jud Murray, associate professor of religion, will provide cultural context for understanding North Korea. Jonathan Winkler, professor and chair of the Department of History, will discuss the history of U.S.–North Korea relations.

Chris Martin, an expert on North Korea who oversees intelligence and special programs for Infoscitex Corporation and teaches urban affairs courses, will discuss intelligence and the threat of conventional war. Liam Anderson, professor of political science, will discuss North Korea’s weapons of mass destruction program and the threat of nuclear war.

The panel discussion is sponsored by the School of Public and International Affairs, the Department of History and the Departments of Religion, Philosophy and Classics.