Composite software and the need for speed 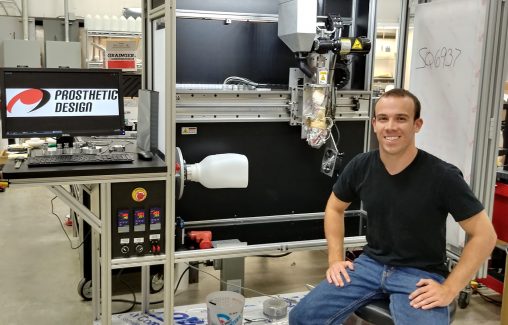 Sean Saffle was a student athlete at Wright State University who turned his passion for engineering and prosthetics into a career.

Sean Saffle was a student athlete at Wright State University who turned his passion for engineering and prosthetics into a career.

A 2017 biomedical engineering graduate, Saffle works as a composite engineer at Prosthetic Design Inc., in Clayton, Ohio. The company develops and refines of prosthetic manufacturing, assembly and adjustability for the clinician, technician and patient. The company uses computer-aided design and manufacturing to create prosthetics for its clients.

Saffle is particularly interested in creating prosthetics for lower-limb amputees.

“I want to work with prosthetics and I want to help people,” he said. “Being around a medical setting gave me an interest in the biomedical field, and I’ve always had an interest with engineering, so I decided to link the two.”

Saffle supervises the manufacturing and assembly technicians and prepares standard operating procedures, plans schedules and checks the quality of parts. He also researches and tests various materials such as resins, carbon fibers, plastics and metals. He uses software to design new parts and test prototypes with 3D printing before mass production.

Since about half of his work involves 3D printing, he said pursuing his hobby of 3D printing was a profitable decision for him.

Before Saffle graduated from the College of Engineering and Computer Science, he interned with Prosthetic Design, working with a variety of materials, networking with other organizations and gaining real-life experience. He also learned about product design and how to create a project from start to finish. Once he graduated last spring, he continued working full-time at Prosthetic Design.

Prosthetic Design operates a side company known as Montgomery Motorsports that uses the same materials in prosthetics to create parts for motorcycles.

“Prosthetics and motorcycles, those are really the two passions of the owner of the company,” Saffle said.

During his time at Wright State, Saffle raced on the men’s cross country team. His best time in an 8K race was 28:56. He has participated in track and field since junior high, and being able to race for the Raiders was one of the reasons he attended Wright State.

Despite undergoing major surgery both before starting college and in his senior year, Saffle considers it one of his greatest achievements that he was able to continue to run.

“I went through some rough surgeries, and I was glad that I could come back and compete at the college level,” he said.