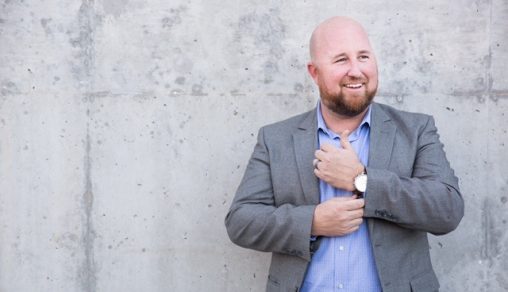 2005 Wright State grad Chris LeVeck grew up helping with the family lighting business, then set off to found a success company of his own.

It was a bright idea that grew into a shining career. And the seeds of Chris LeVeck’s career were planted when he began selling light bulbs door to door when he was only 6 years old.

Today, the Wright State University alumnus is president of a Texas lighting and signage business named by Inc. magazine as among the nation’s fastest-growing private companies, expanding 1,800 percent over the past three years and being ranked number 236 on the Inc5000 list.

LeVeck attributes his company’s rapid growth to exceeding expectations of his customers, persistence and hard work.

“Working over 100 hours a week to get the business off the ground,” he said. “These were real work hours where business was won, not strategic planning thinking we were accomplishing something. And we approach customers’ challenges with a sincere humble attitude to help with innovative solutions.”

LeVeck grew up in Bethel Township near Tipp City in a religious home where his core values were set at a young age. His parents have a lighting business that has existed for more than 40 years.

“Many business lessons were taught at the family dinner table,” LeVeck recalled. “I was selling light bulbs out of my parents’ warehouse, riding my 50cc dirt bike at age 6 up and down Ohio 202 door to door.”

LeVeck also played competitive soccer growing up, traveling the world with his team to compete. After graduating from Tipp City Bethel High School in 1998, he attended Wright State, where he played varsity soccer.

LeVeck says the diversity of Wright State makes it a special place and helped him succeed by showing him the world through the eyes of others.

After graduating in 2005 with a bachelor’s degree in mass communication and organizational communications, LeVeck landed a job at an advertising agency. In 2011, he moved to Texas to work for a large lighting manufacturer.

Two years later, LeVeck set out on his own and founded Facility Innovations Group. The company employs more than 30 workers, has more than 15 company assets throughout Texas and generates over $2 million in annual revenue.

New signage accounts for 10 percent of the company’s business. The rest is LED retrofits for commercial and industrial facilities and servicing signs and exterior lights. The company has serviced highway signs as high as 100 feet in the air, the height of a 10-story building.

Earlier this year, LeVeck expanded his horizons even more, starting a company called Environ Partners with the Jones family of Dallas Cowboys fame. The energy management business offers comprehensive products and services, from procurement and mechanical to solar and LED lighting.

LeVeck has lived in Austin for the past six years with his, wife, Stephanie, and their two children, Crosby and Lincoln.

When he’s not working or sleeping, LeVeck likes drumming, which he calls his “guilty pleasure.”

“It allows me to blow off steam,” he said.

Wright State became an independent institution in 1967 and spent the next 50 years growing into an innovative leader in student success. In 2017, it celebrates its 50th anniversary as an independent public university,