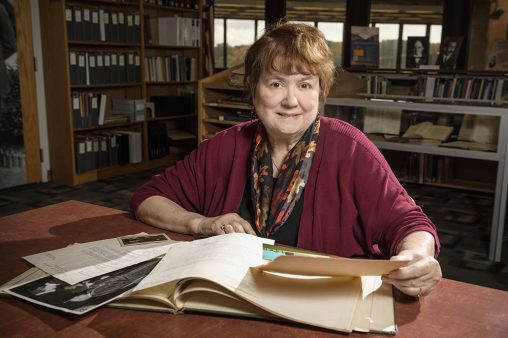 Sheila Skimmerhorn, the first student to register and complete her degree at what would become Wright State, kept a scrapbook of the university’s early days. The scrapbook is now located at Wright State’s Archives and Special Collections. (Photos by Erin Pence)

The early days of Wright State University are still in the memory banks of Sheila Skimmerhorn. And when she goes through her old scrapbook, those memories come rushing back.

Skimmerhorn — the first student to register and complete her degree at what would become Wright State — relived those early days several weeks ago as she pored over her fading photos, letters and newspaper clippings on a table at Wright State’s Archives and Special Collections.

There are photos of a field trip with fellow geology students and a Christmas dance held in the hallway of Allyn Hall. There is a bumper sticker-sized placard that reads: “Draft Beer, Not Students.” There is a thank-you note from then Ohio Congressman Clarence J. Brown and an artfully written congratulatory letter from Brage Golding, Wright State’s first president.

“This is coming back,” said Skimmerhorn, as each new photo or document unlocked a memory and an exclamation. “Oh, for heaven’s sakes!” “How about that?” “I didn’t know so much of this stuff was personal.”

In 1964, Skimmerhorn became the first person to register at the new Dayton school formed by The Ohio State University and Miami University. (There is a photo in the scrapbook of her image on the local television news.) She would go on to earn a bachelor’s degree — double majoring in history and Spanish — from what would become Wright State University and was the first person at the school to complete her degree.

She is currently capping off a career as a Spanish teacher by working part-time at the Dayton Regional STEM School, of which Wright State is a founding partner. 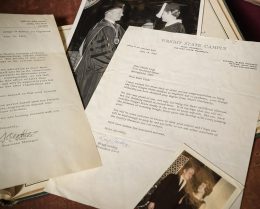 Some of the items in Sheila Skimmerhorn’s scrapbook.

There are several photos of Skimmerhorn and fellow geology classmates on a field trip to Lake Hope State Park.

“We actually got thrown out of a store because they called us hippies,” she said.

There is a photo of Skimmerhorn and her future husband at Wright State’s first Christmas dance.

“We had it over in Allyn Hall,” she said. “There was no venue for it at all. It was in the hallway.”

Skimmerhorn even has Wright State’s first postcard, one that features a color shot of Allyn Hall. And the “Draft Beer, Not Students” placards were put up by students around campus at the height of antiwar protests during the Vietnam era.

“I remember I posted one in my father’s shower, and my father was an Air Force major,” Skimmerhorn recalled. “It didn’t go over well. He was not happy.”

But Skimmerhorn said she and her fellow students had lots of “innocent fun.”

“I never encountered drugs here, and we were in the hippie era,” she said. “Even our protests about Vietnam were not violent. It was a different time. I think my generation, my age group, was the end of innocence.”

“We wanted to name the university Southwestern Ohio,” she said. “We had all of these signs — ‘Wright Is Not Right.’ There were too many things that were ‘Wright’ around Dayton and we wanted something that was totally different.”

The letter from Congressman Brown thanks Skimmerhorn and other members of the Student Senate for inviting him to speak on campus in 1965.

“I remember that because the suit I wore was almost identical to the one his wife wore,” she said. “The same color and everything.”

There is a photo of Skimmerhorn graduating from Miami University in 1967. (Wright State didn’t have its own graduation until the following year.) The letter to Skimmerhorn from President Golding says it all:

“I have wanted for some time to offer my congratulations on being the first Wright State student to register and graduate even though officially you have obtained your degree from Miami University. We are very proud of you for not only being our first unofficial alumna, but for finishing school in record time.

“It is my hope that you remember Wright State fondly in the years to come and will like me have the pleasure of watching Wright State grow and develop with every passing year. You would be most welcome to return to visit your school and I hope you would kind enough to stop by and say hello to me and members of the faculty whenever you can return.” 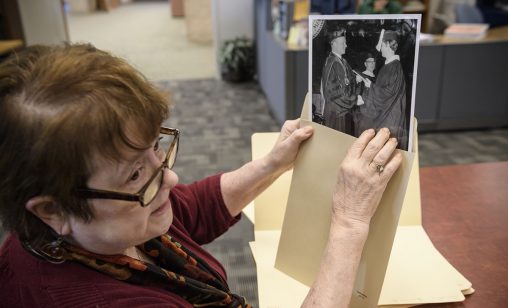 Skimmerhorn is capping off her career as a Spanish teacher by working part-time at the Dayton Regional STEM School.

Skimmerhorn remembers students being able to drop in on Golding at his office unannounced and chat with him.

“You were almost on a first-name basis with him,” she said. “It was so different.”

Skimmerhorn said there were only four buildings on campus when she graduated and that she feels blessed to have been on the ground floor of Wright State’s amazing growth. She returned to Wright State as a student as recently as 15 years ago and continues to work for the university at the STEM school.

Skimmerhorn said going through the scrapbook was very emotional for her.

“It’s very moving,” she said. “Part of it is a sadness of an era gone by, but there is also a joy. I hope none of this gets lost — not for my memories, but for the memories of Wright State.”