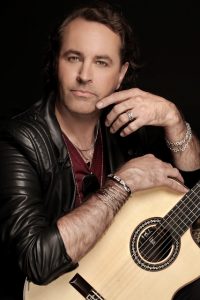 1991 graduate Michael Bard will perform at the Washington Choral Arts Society’s Christmas concert at the Kennedy Center for the Performing Arts in Washington, D.C.

It was one of those serendipitous moments — an accidental turn of good fortune.

Jeff “Skunk” Baxter, former guitarist with Steely Dan and The Doobie Brothers, was unable to perform in 2014 as the featured soloist for some of the holiday concerts at the Kennedy Center for the Performing Arts in Washington, D.C., because of a schedule conflict.

Enter Wright State University alumnus Michael Bard, an accomplished guitarist and Washington-based guitar instructor who has given private lessons to the likes of former Secretary of State John Kerry and other notables.

Bard not only took over most of the Washington Choral Arts Society’s Christmas concert performances for Baxter in 2014, but he has since been the featured soloist in 2015, 2016 and will again be this year when he takes the stage at the Kennedy Center on Dec. 17, 18 and 24.

“They were mighty big shoes to fill and a fortuitous occurrence,” Bard said of replacing Baxter.

And Bard said it is a real honor having been asked back this year as the featured soloist.

“Performing in front of thousands of concertgoers in a world-renowned venue is a cosmic experience,” he said. “It’s like justification and reward for all the years of practice and dedication. The payoff is so incredible.”

Bard grew up in Dayton. His father taught math at Fairview High School and his mother was a science and English teacher at St. Rita Catholic School.

Bard was smitten with music and guitars when he was 8 years old after his parents bought him his first KISS album. That was followed by Beatles, Queen, Led Zeppelin, Dire Straits and other albums. 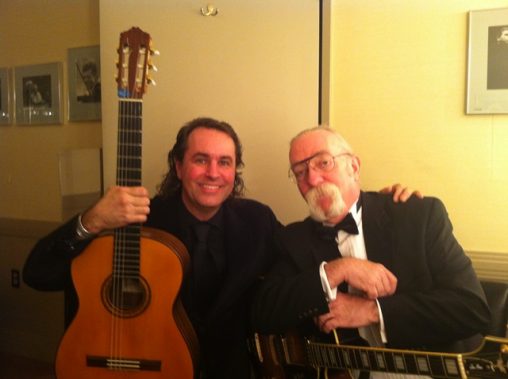 Backstage photo of Michael Bard, left, with Jeff “Skunk” Baxter before the Kennedy Center Washington Choral Arts Society holiday concert at which they both performed in 2014.

Bard was an adjunct faculty guitar instructor at the Washington Conservatory of Music in 1997-98 and at Georgetown University’s Summer Junior Discovery Program in 2009. He has performed classical, jazz and Latin guitar at embassies, schools and public venues around the world as part of State Department diplomatic tours. He has played in El Salvador, Chile, Kuwait, Jordan, Yemen, Saudi Arabia, Morocco and Bahrain.

Today, Bard has guitar studios in Washington and Bethesda, Maryland. He is proficient in rock, pop, jazz, classical and flamenco techniques and uses music theory, harmony, sight-reading, repertoire as part of his curriculum. He is experienced in coaching students for auditions, recordings and professional performances.

Living in a cosmopolitan city like Washington has boosted Bard’s career as a musician, educator and composer. He is the bandleader of Trio Caliente, whose music has been featured on the E! Network and the former NBC hit TV show “Smash.”

Bard said he is grateful for the experiences that have happened in his life.

“It’s all because I picked up the guitar at a young age and I knew with an indelible passion what it could do for me in a visceral way,” he said. “Also, I’m so grateful to my parents, who encouraged me to pursue a career in music. I can’t wait for the next magical musical moment to happen.”