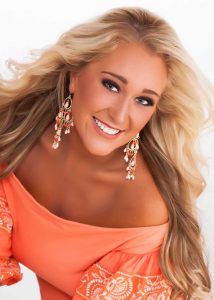 Whitney Jenkins, a clinical laboratory science major, created a popular STEM program for children and has competing in pageants since the third grade.

A Wright State University student who has created a popular science, technology, engineering and math (STEM) program for children will compete in Hollywood for the title of National American Miss.

Whitney Jenkins, a clinical laboratory science major, has participated in pageants since she was in third grade, when she was crowned Little Miss River Days in Portsmouth, Ohio. Since then, she has won several other titles, such as Miss Ohio American Coed Pre-Teen and International Junior Miss Ohio Jr. Teen.

Jenkins said both her STEM work and pageant experience have given her valuable life skills.

“I have grown confident in myself and my abilities,” she said. “Community service is something that pageants have taught me is important because it is fulfilling to give back. These skills are valuable and will help me in my career and future endeavors.”

Jenkins created a program called STEM4KIDZ, which introduced children in kindergarten to fifth grade to subjects in science, technology, engineering and math. The motivation for a STEM-based program, Jenkins said, came from camps she attended when she was younger.

“I was privileged enough to be able to attend gifted summer camps at various universities such as Purdue, Northwestern and Miami University,” she said. “I always took a class that revolved around the field of STEM.”

The camps inspired her to learn more about STEM and the idea that anyone can go into a STEM field.

“I wanted to bring back my experiences at these summer camps to rural Southern Ohio to give children in my community the same fun experience I had,” she said.

As she was entering her senior year of high school, Jenkins hosted a Super STEM Saturday at Shawnee State University in Portsmouth. She created 24 hands-on grade-appropriate STEM activities with a Dr. Seuss theme.

Over 70 children attended her first Super STEM Saturday. Each child took home a bag with experiments that would continue to spark their interest in STEM.

STEM4KIDZ was so popular that, once Super STEM Saturday ended, children would ask Jenkins when it would continue whenever they saw her. Word of Jenkins’ project started to spread. She was asked to give a presentation about STEM4KIDZ to The Higher Appalachian Education Network. After that, she was asked to present at a national conference in Tennessee.

“The feedback from everyone in attendance was unbelievable,” she said. “Educators kept coming up to me and asking how they could access the materials to STEM4KIDZ.”

Since then, Jenkins has been in the process of publishing STEM4KIDZ so it can be used across the country.

Jenkins said that both STEM4KIDZ and pageant work have given her valuable life skills such as event organization, public speaking and time management. Pageants also taught her to dance in six-and-a-half-inch heels.

Jenkins transferred to Wright State in the spring of 2017 from Miami University.

“Wright State was much smaller and I felt a sense of belonging, like I was at home with family,” she said. “The faculty and other students were so welcoming and they are willing to go out of their way to help me in any way they possibly can.”