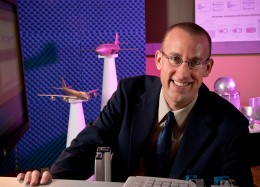 The IEEE has named Wright State professor of electrical engineering Brian Rigling as a Fellow for his contributions to synthetic aperture radar imaging.

The IEEE is the world’s largest association of technical professionals, with more than 400,000 members in chapters around the world.

The IEEE Grade of Fellow is conferred by the IEEE Board of Directors upon a person with an outstanding record of accomplishments in any of the IEEE fields of interest. The total number selected in any one year cannot exceed one-tenth of 1 percent of the total voting membership.

IEEE Fellow is the highest grade of membership and is bestowed upon a very limited number of senior members who have contributed importantly to the advancement or application of engineering, science and technology bringing significant value to society.

He joined the faculty at Wright State in 2004, where he is now a professor and chair of the Department of Electrical Engineering.

Originally developed primarily as a defense technology, radar has emerged as a widely applicable sensor, with a growing presence in transportation, medicine, outer space and below-ground exploration.

Rigling credits his collaborative relationship with radar experts in the Air Force Research Laboratory at Wright-Patterson Air Force Base and the broader radar research community.

“I am grateful to the many mentors that have supported my professional development over the years from Wright State, the Dayton area, and the IEEE,” he said. “This recognition reflects the strength of the local region in the research and development of sensor technology.”