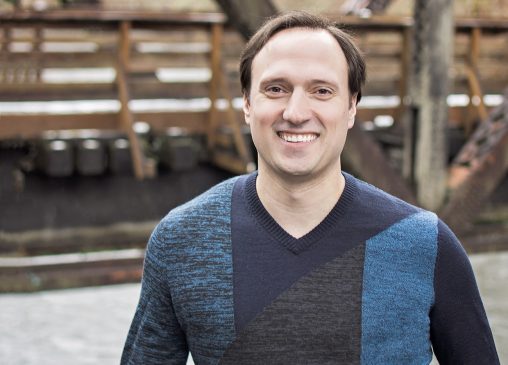 Wright State graduate Christian Duhamel was named one of the winners of the 2018 Kleban Prize in Musical Theater. He was recognized as the year’s most promising musical theatre librettist.

For 28 years, the Kleban Prize has honored some of the American musical theatre’s brightest developing writers. Duhamel, who will receive $100,000 distributed over two years, and the other winners will be honored on Feb. 5 at a private ceremony.

The Kleban Prizes are presented by the Kleban Foundation, which was established by Edward Kleban, best known as the Tony Award and Pulitzer Prize-winning lyricist of “A Chorus Line.”

Duhamel, who graduated from Wright State in 2005 with a B.F.A. in musical theatre, said the prize signals his emergence as an artist gaining traction in his broader public career.

“I certainly hope the Kleban will be a major door-opener for me,” he said. “But beyond the external effects, winning the award has given me a huge boost in confidence to continue on my path and even encouraged me to reinvest in some of my projects I thought might be too outside the box or unconventional.”

In his application for the Kleban Prize, Duhamel submitted his libretto for “My 80-Year-Old Boyfriend,” which premiered last May at the Merrimack Repertory Theater in Lowell, Massachusetts. “My 80-Year-Old Boyfriend” is a one-woman show featuring Broadway actress Charissa Bertels, with book and lyrics by Duhamel and music and lyrics by Edward Bell.

Talks are underway with several larger regional theaters about a subsequent production, with plans to bring the show Off-Broadway.

Duhamel has several other projects in the works, including “The Girl Who Turned Into a Feather,” a piece of magical realism that was recently workshopped in Chicago at the Something Marvelous Theater Festival; a parody musical called “X-MAS: A Merry Mutant Holiday Spectacular” that he hopes will have a regional production this winter; and a full-length musical, “Mary Walker Wears What She Wants,” about Mary Walker, a Civil War surgeon and the only woman to receive the Congressional Medal of Honor. 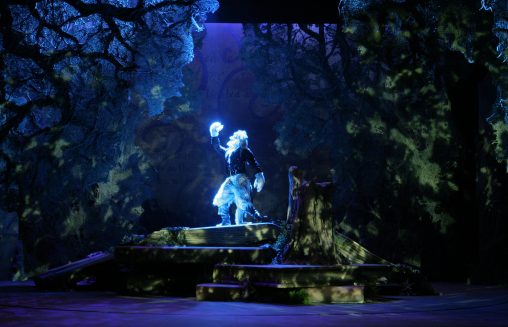 As a student, Christian Duhamel played the Wolf in Wright State Theatre’s production of “Into the Woods.”

Duhamel described writing as both a “very magical experience” and a private one. He said writing offers an important balance to the public work he does as an actor in the rehearsal room and on stage. He likes that writing allows him to determine the course of the story rather than interpreting someone else’s work.

He first started going to the theater as a kid with his family. In elementary school, he participated in band and choir, took drama classes in junior high and attended a summer arts camp for two years, where he was able to act, compose and write poetry.

“Eventually I was in a youth summer stock production of ‘The Sound of Music,’ and that pretty much sealed the deal,” he said.

He embraces the challenges of making a living in the theater.

But living with those ups and downs is worth it because of the joy the theater gives him.

“When I’m making theater, I feel like I get to contribute most effectively to our growth as individuals and our progress as a society,” he said.

At Wright State, he performed in many productions, including “Fiddler on the Roof,” “Heidi Chronicles,” “How to Succeed in Business Without Really Trying” and “Into the Woods.”

He also began writing music and lyrics as a student and worked with Greg Hellems, professor of theatre arts, to develop a musical, “Reinventing Romance.” The piece won awards from the Kennedy Center American College Theatre Festival for playwriting, lyrics, music and direction.

“There are things Greg told me during that process, tidbits of advice and gems of knowledge, that I still carry with me today and continue to pass on to the other writers I work with,” Duhamel said. 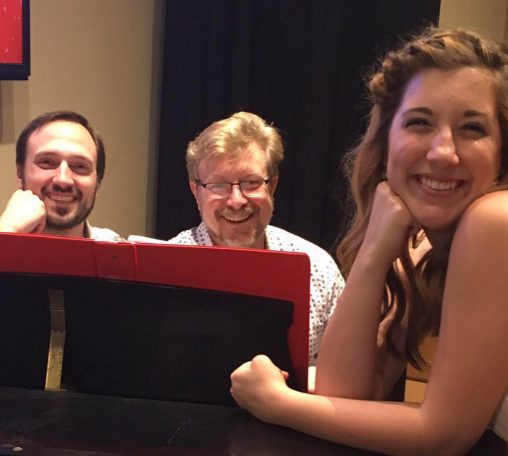 Duhamel returned to Wright State in 2016 to develop a new work, “Miss Mayor,” with Hellems and Ellie Margolis, who was a senior acting major. The satirical political musical was a finalist for B-Side Productions’ National American Musical Award and was presented during the Puzzle Theater Festival in New York City.

Duhamel valued that Wright State’s Theatre Program provided a rich, conservatory-style curriculum focused on acting, singing and dancing, while also giving him the flexibility to pursue his interest in playwriting, directing, music directing and literature.

It also taught him the importance of balancing training with living and invited him to take artistic risks in a safe environment, and to learn and grow from those risks.

More than anything, he said, the Theatre Program “taught me to honor my strengths and the strengths of others, and gave me the opportunity to see that a life in theater can be a celebration of everyone’s strengths, rather than a competition.”