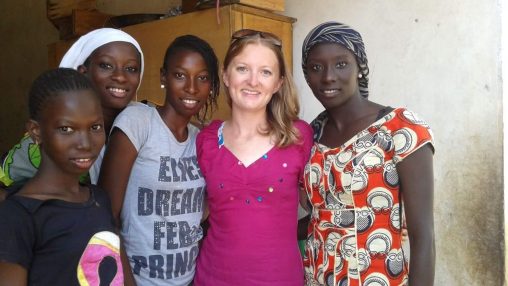 Jacquelyn Weaver, who graduated from Wright State in 2014 with degrees in religion and political science, spent 17 months as a volunteer with the Peace Corps in the west African nation of Senegal. She is pictured with her training host family.

She helped build ovens to replace dangerous open cooking fires. She painted a world map on the side of the village schoolhouse to aid geography lessons. And she made some lifelong friends.

That was the give and take of Wright State University alumna Jacquelyn Weaver, who recently spent 17 months as a volunteer with the Peace Corps in the west African nation of Senegal.

Weaver’s decision to volunteer with the Peace Corps was an outgrowth of her desire to relate to people and help them without being motivated by money.

Weaver grew up in the Dayton area, graduating from Northmont High School in 2005. She wanted to pursue photography, but couldn’t afford the cost of instruction so she worked various jobs for three years to save money.

With the help of Wright State’s financial aid office, she enrolled at the university in 2008 and decided to study anthropology because she felt it had a connection to her love of photography. However, she quickly switched her major to religion.

“For me, religion was the foundation of a lot of why people do what they do, and that’s what I was trying to understand,” she said.

Weaver took as many religion classes as she was allowed. She also studied abroad — in India, Thailand and twice in France.

When she was back at Wright State from her study abroad trip to India, she came across a photo she had taken of a political poster in that country.

“It clicked,” she said. “I didn’t know anything about politics and that formed so much of what I had just seen.” 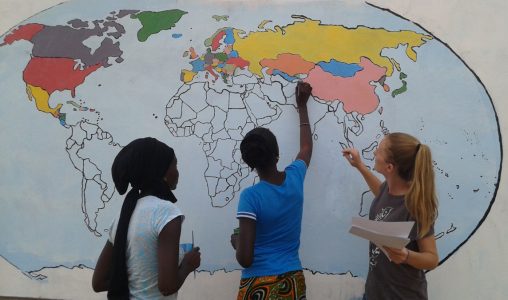 Jacquelyn Weaver worked with schoolchildren to paint a world map mural on the side of the village schoolhouse.

So six weeks before her scheduled graduation, she began working on another degree — in political science. That extended her college career by another two years.

She graduated in 2014 with degrees in religion and political science. A year later, she was in the Peace Corps.

About 220,000 Americans have served in the Peace Corps in 141 countries, the vast majority in Africa. Women constitute more than 60 percent of Peace Corps volunteers.

Weaver arrived in Senegal in February 2016. About 15 million people live in Senegal, which won independence from France in 1960 and is predominantly Sufi Muslim. The largely agricultural country has a tropical climate and produces cash crops such as peanuts, sugarcane and cotton.

“The first thing that hits you in Senegal is the heat,” she said. “When I got off the plane, it was 110 degrees.”

Then she quickly realized she was among only a few Westerners.

“Being in the minority is a unique experience,” she said. “You learn so much about yourself that way.”

Weaver was assigned to Bacco Seereer, a small, six-house village of fewer than 75 residents.

“We were constantly going to funerals, and I didn’t understand why,” said Weaver. So she started working on health-related projects and helped conduct educational workshops.

Villagers would cook on open flames, which made the cooking process long and labor-intensive. In addition, the fires produced a lot of smoke and were dangerous for children.

“One of the children I was very close to fell into the fire and burned the side of her face,” Weaver said. 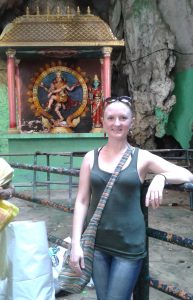 So she and Peace Corps volunteer Ryan Kimmitt partnered with a German nongovernmental organization to build ovens that were much safer and sped up the cooking process. They built three ovens to show the villagers how to do it and eventually each house in the village had one or two ovens.

“I was happy with that because I got to see my host mother just light up about the whole thing,” said Weaver.

She also painted a world-map mural on the side of the village schoolhouse because none of the children knew where Senegal or Africa was in the world.

“I wanted to do it on the outside because I wanted the community to be able to use it,” she said.

She said one of the most challenging parts of her experience was getting accustomed to the Senegalese culture of joking and needling.

“If you don’t have a sense of humor or understand theirs, it can cut pretty deep sometimes. But they don’t mean anything by it,” she said. “The culture is fantastic, but it took some getting used to.”

Weaver was in Senegal for 17 months before leaving for medical reasons.

Weaver said she achieved her goal of learning how other people live, made some lifelong friends and developed a perspective that gives her a much deeper understanding of the world.

Weaver is currently in Kuala Lumpur, Malaysia, teaching English to children age 5 to 16. But she wants to go to graduate school.