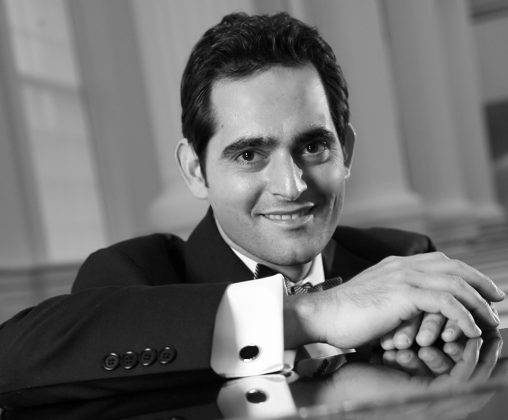 Malek Jandali, a Syrian-American composer and pianist, will headline A Symphony for Peace: Reflections on the Syrian Crisis on March 28 in Schuster Hall.

Using dialogue, film and music, a special event at Wright State University will explore the refugee crisis caused by the Syrian civil war.

A Symphony for Peace: Reflections on the Syrian Crisis takes place Wednesday, March 28, at 7 p.m. in Schuster Hall in the Creative Arts Center. The event is free and open to the public.

The event features a lecture on the Syrian refugee crisis; a talk by a Wright State student who is originally from Damascus; a documentary and photography project on refugees; and the world premiere of a work by Malek Jandali, a Syrian-American composer and pianist.

Jandali is the founder of Pianos for Peace, a nonprofit organization based in Atlanta that seeks to build peace through music and education. He frequently contributes with international organizations UNICEF and Save The Children to raise humanitarian aid for children in need around the world. He has visited refugee camps in Turkey, Syria, Croatia and Malta to raise awareness and humanitarian aid. He has received the GUSI International Peace Prize for his humanitarian and peace activism and the Global Music Humanitarian Award for his contribution to peace and justice for the Syrian children.

A Symphony for Peace is sponsored by CELIA, Wright State’s Ohio Center of Excellence for Collaborative Education, Leadership and Innovation in the Arts, and the College of Liberal Arts.

The event is organized by Shelley Jagow, professor of music at Wright State, who said a Symphony for Peace will send audience members on an emotional journey designed to help them believe in the power of kindness, awareness and humanity.

“A Symphony for Peace is a collaborative event between Wright State University faculty and students, community, business leaders, local elementary and high schools and a guest artist from New York City,” Jagow said. “All join hands to bring a social awareness to the Syrian crisis through the medium of dialogue, film and photography and music performance.”

Jagow was inspired to organize the event after seeing a powerful image of a little boy covered in dust, with a stunned look in his eyes in Aleppo, Syria. She started reading about the Syrian civil war and refugee crises not only in that country but also around the world.

“Before that I didn’t even realize how large some of these refugee camps were,” she said.

More than 5.5 million people have fled Syria since 2011, seeking safety in Lebanon, Turkey, Jordan and other countries. Another 6.1 million Syrians are displaced inside Syria as the war continues. More than 8 million Syrian children are in immediate need of aid, including more than 2 million child refugees.

As she developed A Symphony for Peace, Jagow decided to focus on raising awareness about the plight of refugees.

“I thought it would be interesting to teach my students more than music and bring a sense of awareness and understanding and education through music,” she said. 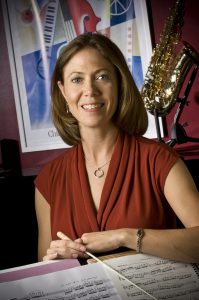 Shelley Jagow, professor of music, organized a Symphony for Peace to bring awareness to the Syrian crisis through dialogue, film and photography and music performance.

The event is arranged like a symphony, with three movements or sections: a dialogue section, film and photography portion, and music performances. It is a multidisciplinary endeavor featuring faculty and students from music, history, religion, photography and engineering.

In the dialogue portion, Awad Halabi, associate professor of history at Wright State, will provide an overview on the Syrian refugee crisis.

Four seniors from Chaminade Julienne High School — Emery Monnig, Ian Carmody, Micah Marshall and Zach Scott — will present their “Letters of Hope” project. Jagow asked the high school students to talk to local elementary schoolchildren about how their lives are similar to and different from children living in refugee camps. The students will collect letters written by the schoolchildren for refugee children.

Aghiad Alkhiamy, a junior biomedical engineering student at Wright State, will talk about his home in Damascus, where his family still lives. After he graduates, Alkhiamy hopes to build prosthetics and help victims in Syria.

In the film and photography portion, Dan Bracken, a media producer from Ginghamsburg Church in Tipp City, will show a short documentary on his time in a Lebanese refugee camp.

Jandali will discuss his symphony “Syrian Symphony for Peace.” His compositions integrate Middle Eastern modes into Western classical forms and harmony. The night his symphony premiered in New York, his parents were attacked in their home in Syria by members of the Assad regime.

Ben Montague, associate professor of photography, will show his “Portraits of Refugees,” which will be displayed with a musical performance of the Wright State Symphonic Band.

In the music portion, the Wright State Saxophone Quartet will perform the world premiere of Jandali’s new work for saxophone quartet.

The event will close with an emotional performance of the late American composer David Maslanka’s “Give Us This Day” by the Wright State Symphonic Band, which represents more than 18 majors across the university.

Jandali will also visit Wright State as a CELIA Distinguished Visiting Artist. In addition to participating in Symphony for Peace, he will talk with School of Music students about Pianos for Peace and opportunities for careers in the music industry.

A Symphony for Peace is supported by the Virginia B. Toulmin Foundation, Dr. John L. and Mrs. Gail A. Lyman, the College of Liberal Arts, Department of Art and Art History, Department of History and School of Music.