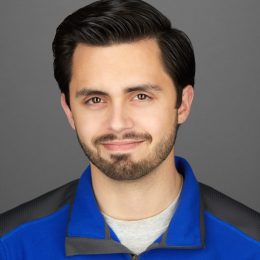 He works for a company founded and run by medical doctors, but he’s not one. He’s an engineer. A good one.

He works directly with the company CEO and leading doctors to support clinical research, manage projects for clients and help staff clinicians in their research projects and with writing proposals and journal articles.

Ballester says the most gratifying thing about his job is working with a company that can influence health care policy for the better by using quantitative analysis to measure quality and set standards for hospital networks, insurance companies and large health care organizations.

“And I get to help with some fascinating applied research,” he said.

Ballester was born in Dayton, but spent much of his boyhood in Albuquerque, New Mexico, and Mountain Home, Idaho. He returned to the Dayton area when he was 12 when his father retired as a lieutenant colonel after 24 years in the Air Force.

Ballester was home-schooled from kindergarten through high school, graduating in 2009. He decided to pursue engineering in college because he was good at math, although he didn’t particularly enjoy math at the time.

“But I was very fortunate to fall in love with math and physics and my engineering classes in college,” he said. “I find it all very fascinating now.”

He eventually focused on industrial engineering at Wright State’s College of Engineering and Computer Science because its basis on organization and logistics as well as its broad range of applications appealed to him.

“It turned out to be a great choice; I absolutely love it,” he said.

But Ballester also has a musical side.

When he was in junior high school, he and his siblings formed a string trio and later a quartet, with Ballester playing the violin. Over the years they played for weddings, dinners, Dayton Philharmonic fundraisers and other events in the Dayton area.

“We even had business cards,” he said.

At Wright State, Ballester played in a piano trio as well as several orchestras and vocal ensembles.

He says he was attracted to Wright State because it offers a quality education at a reasonable price and was close enough that he could continue to live at home.

Ballester’s graduate research focused on the unique emerging field of health-care systems. He collaborated with the Boonshoft School of Medicine and Dr. Mary McCarthy, who served on his Ph.D. committee and shared valuable insights from the clinical field. He had the opportunity to work with several hospitals, including Kettering Medical Center and Miami Valley Hospital as well as the Boston VA Center and Maine Medical Center.

Outside the realm of health care, Ballester conducted research on retail store layout and had a two-year undergraduate research internship in social network analysis at the Air Force Institute of Technology. But he said, “Once I started working on health-care research and saw the vast opportunities for improvement, I knew that was the field for me.”

“Wright State’s close-knit nature enabled me to get to know my professors personally, which greatly helped me succeed in my classes when I could readily approach them for help,” he said. “It enabled me to meet my future graduate adviser and mentor, associate engineering professor Pratik Parikh. My professors also provided advice and support for various life decisions, both academic and personal, such as my choice of major, decision to enter grad school, interview advice and choice of job.”

Ballester said Wright State also provided him with scholarships, assistantships and undergraduate jobs such as a stagehand and calculus lab grader. He said the university also has a great support system of facilities, software and educational materials.