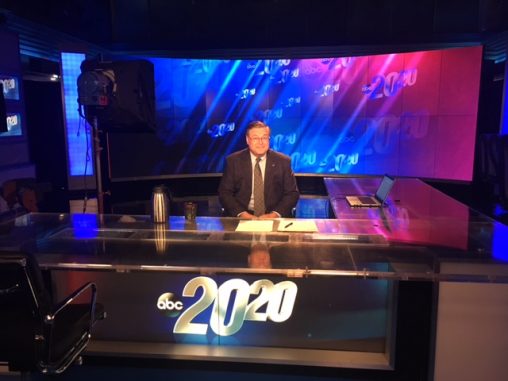 Dan Krane, one of the world’s foremost DNA experts, discussed the DNA results in a high-profile, double-homicide case in Virginia on an episode of “20/20.”

A German diplomat’s son, Jens Söring, is serving two life sentences for the 1985 slayings of his girlfriend’s parents in central Virginia. Söring denies having committed the crime and has written a number of books about prison life and religion.

“’20/20′ is exploring this and reached out to me for an independent objective look at the results to help them in their discussions with Soering and his attorney,” said Krane.

The segment with Krane was filmed in September in “20/20’s” studio in New York City. The episode aired on March 27.

Krane has testified as an expert witness in more than 100 criminal trials in which DNA evidence was presented. He is also the president of Forensic Bioinformatics, which has reviewed testing from hundreds of cases around the world every year since 2002.

In September 2016, Krane was featured in a special miniseries on “Investigation Discovery (ID),” a U.S. mystery-and-suspense network.

In 2013, Krane was the keynote speaker at the annual Writers Police Academy in Jamestown, North Carolina, to talk about DNA testing. Mystery writers from around the nation flock to the academy to come up with story plots that are accurate and authentic. The academy not only features talks from experts — Marcia Clark, head prosecutor in the O.J. Simpson murder case, was the 2012 keynote speaker — but it also offers the writers an up-close view of law enforcement techniques, practices and inside knowledge.