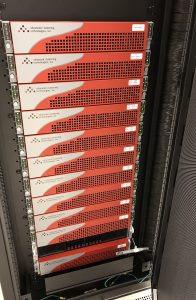 Powerful computers and computer software have become instrumental in solving many scientific questions.

“Physical processes are governed by mathematical equations,” said Sharma. “Most of these are fairly complicated. They can’t be solved by pencil and paper. They must be solved by computer.”

Previously, Wright State researchers were confined to running small calculations on individual computers or trying to obtain computer time at the Ohio Supercomputer Center managed by The Ohio State University, which limits the programs that can be run and restricts access by students.

The Wright State cluster consists of 36 computer nodes — 2U Dual Xeon base system with 2x Intel Ten Core Xeon processors, 128GBRAM, 48TB of hard disks with 42TB usable storage and 1GPU node with 2x Nvidia Tesla — connected together via FDR InfiniBand networking capable of communicating at 56Gbps. The nodes are stacked on top of each other and housed in seven-foot-high cabinets.

The cluster is located at the Computing and Telecommunications Services (CaTS) data center in the Dunbar Library Annex. It is always up and running and can accommodate an indefinite number of users, working at the cluster or remotely from their offices or labs.

In 2013, Wright State began recruiting faculty members with computational backgrounds to inject more computation into university research and the classroom. Hired were Sharma in physics; Mohamed Sulman in mathematics and statistics; and Nikolai Priezjev in mechanical and materials engineering — who began the effort to write grants to procure HPC computing platform.

In 2015, Sharma, Sulman, Priezjev and Oleg Paliy in biochemistry and molecular biology won a $150,000 National Science Foundation grant from its Major Research Instrumentation program. Combining the grant with a $60,000 match from various Wright State colleges and departments provided the funding to buy the computer cluster.

Historically, physics research was theoretical or involved running experiments in a lab, making observations and interpreting the results. Computational physics has since become the “third pillar,” Sharma said.

“Since computers have become more and more powerful, there is now a great deal of computational component to their research,” he said.

Researchers who use the cluster must write computer code and develop a numerical scheme to get the answers to their questions. Some calculations can take days and even weeks to run and require parallel computer processing.

“That’s where the power of this cluster comes in,” said Sharma, who plans to use it for three of his research projects.

One is to study the ionosphere, the layer of atmosphere 50 to 600 miles above Earth’s surface that contains a high concentration of ions and free electrons and is able to reflect radio waves. Another project has to do with lasers. It requires quantum chemistry calculations. A third involves the structure of alloys that requires density functional theory calculations.

Use of the cluster for other research from around campus includes materials modeling, oil exploration, medical imaging, microbial ecology, human cognition and analysis of psychological data.

Using the cluster is free to any Wright State researcher, but there is a queuing system that gives priority to users who require smaller calculations.

Sharma has already created user accounts for some researchers, and he is in the process of creating a website and user guide.

He has also been injecting high-performance computing into the classroom, teaching an introduction to Python course for incoming physics majors as well as an upper- and graduate-level parallel-computing course.

The Wright State cluster will also be available for research and coursework by students at other universities in the region such as Sinclair College and Central State University.

Many recent studies have shown the importance of having computational skills, and college graduates are increasingly being asked by potential employers if they have them, said Sharma.

“That skill set is in demand for sure,” he said. “And if they don’t learn it here, they don’t get those skills.