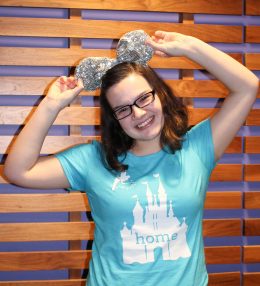 Hannah Tokasz is a Disney fanatic. She spent more than six months working at Walt Disney World in Orlando, Florida, through a college internship program. She got the chance to drive “Monorail Green,” which became affectionately known as “Hannah’s train.”

Her theme park enthusiasm began in middle school when she went to Kings Island with a friend and her family. At first, she was hesitant, saying she wasn’t a fan of roller coasters but decided to go anyway.

After riding other roller coasters in the park, Tokasz decided she was ready to try the Diamondback. She had to wait for nearly three hours in line for the roller coaster.

“They somehow got me in line and I got on it, but I ended up loving it so much. That trip was a real game-changer,” said Tokasz, who majors in mass communication.

Tokasz applied to the Disney College Program during her freshman year at Wright State. After a long waiting period, she made it into the program.

“It’s a really competitive program,” she said. “I didn’t think I was going to get in.”

After an online interview and phone interview, Tokasz was assigned to work in monorails. She trained for four night shifts and four morning shifts. After she passed her assessment, she was allowed to work on the monorail. She worked at Disney from August 2016 to January 2017. 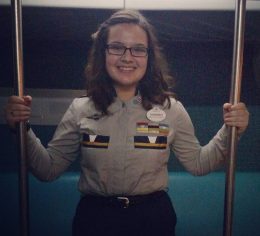 After she graduates Tokasz would like to return to Disney as a corporate intern.

During her work on a platform, Tokasz said she found a roll of stickers that look like pilot wings. She gave them out to the passengers she worked with, which they loved.

“Once I got going, I had my groove. People called me the ‘sticker lady.’ They started asking for me, I ended up giving out like 6,000 stickers,” she said.

Last year, she returned to Disney for a summer program, working in merchandise in Hollywood Studios. She spent most of her time in the Star Wars Launch Bay, which sold lightsabers and other Star Wars merchandise.

After she graduates Tokasz would like to return to Disney as a corporate intern.