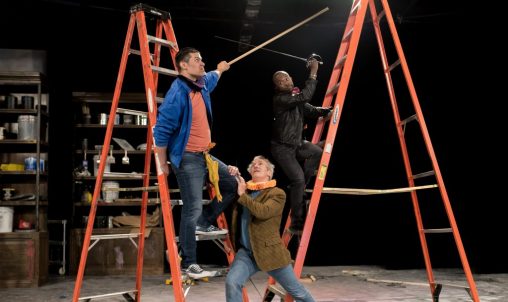 The Human Race Theatre’s production of “The Complete Works of Shakespeare (Abridged) [Revised]” featured Wright State talent behind the scenes and on the stage, including professor Bruce Cromer, center, and alumnus Shaun Tubbs, right.

All it takes to see every Shakespeare play ever written is 97 minutes, a healthy dash of comedy and some Wright State talent.

That’s what audiences experienced during the Human Race Theatre’s production of “The Complete Works of Shakespeare (Abridged) [Revised]” earlier this summer.

On the stage, the production featured Bruce Cromer, professor of theatre arts at Wright State, and Shaun Tubbs, who received his bachelor’s degree in acting from Wright State. Director Aaron Vega also graduated from Wright State with an acting degree.

Wright State talent was also involved behind the scenes. The production stage manager, Jacquelyn Duncan, received a bachelor’s degree in theatre design/technology with an emphasis in stage management from Wright State.

Over his 40-year professional acting career, Cromer has acted, directed or choreographed stage combat in 23 of Shakespeare’s plays. He performed for seven seasons with the Alabama Shakespeare Festival. While working on his bachelor’s degree in acting at Wright State, he played Hamlet, Romeo, Tybalt, Lysander, Edgar in “King Lear,” Guiderius in “Cymbeline,” Macduff in “Macbeth,” Proteus in “Two Gentlemen of Verona” and Sebastian in “Twelfth Night.”

“The Complete Works of Shakespeare Abridged” compiles all 37 of Shakespeare’s plays into one. The comedy involves three actors who attempt to act out the stories in their own way. The show ran from May 31 to June 17 at the Loft Theatre in Dayton.

“The original trio of writers of the ‘Complete Works’ encourage performers and directors to bring new pop-culture references to the original script, to keep it current and specific to the intended regional audience,” Cromer said.

The production referenced Wright State and a fictional acting method known as the “Cromer method.”

“I’ve been blessed to share a professional theater stage with over 35 past students, on stage and in the wings. This is the way the acting mentors and apprentices are supposed to share lessons, experiences and secrets of the trade.’ Actors teaching other actors, then being in companies together,” Cromer said. “Shaun Tubbs is a prime example of a former pupil now being a peer. I love being in such a fast and furious comedy with him, decades after he was in my classes and Wright State shows.”

Cromer said he thoroughly enjoyed performing in the play.

“We explored the many ways our comedy and character relationships could go,” he said. “Aaron’s direction allowed for experimentation and a butt-load of laughter in the process.”