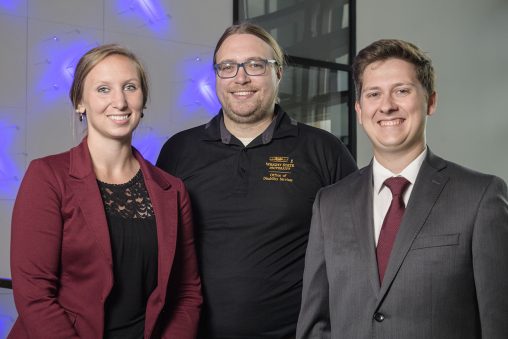 Wright State University student Ben Sanders was recognized at the Pentagon for his role in the Workforce Recruitment Program, an internship program used by the military, federal government and private sector to place students with disabilities into meaningful jobs.

Sanders, who majors in human resource management, was the only person honored by the Air Force at the July 26 awards ceremony. One award each was also given out by the Army, Navy and Marines.

“To be the one representative of the Air Force and one of four students selected from across the country for this award is a huge honor,” said Sanders, who interns at Wright-Patterson Air Force Base. “There can be challenges for students and individuals with disabilities in finding careers and jobs. This is a really great way to get their foot in the door — whether it’s just a part-time internship they can put on their resume as a business experience or if it turns into a permanent position.”

Also acknowledged at the awards ceremony was Molly Fore, a human resources specialist with the Air Force Materiel Command’s Personnel Programs Branch who has worked with the Wright State interns.

“There are a lot of great engineering students and computer science majors,” said Fore, a Wright State alumna with a degree in human resources. “And we need those critical fields on base.”

Fore said the national recognition is a testament to the success of the program. The 14-week internships are paid for by the Defense Department and the U.S. Department of Labor.

“I think there has been a lot of increased awareness on base,” she said. “We really hit the ground running and marketing the program — doing town hall meetings, blasting emails out, talking about the benefits of the program.”

Sanders, who is enrolled in Wright State’s Office of Disability Services, was accepted into the Workforce Recruitment Program internship program at the Air Force Materiel Command in January.

After starting his internship on March 5, he helped organize and build the agenda for the first Air Force Materiel Command Equal Employment Opportunity symposium. The event drew 75 equal employment opportunity representatives from seven Air Force bases around the country. He later helped the Workforce Recruitment Program identify students who might be good candidates to fill available positions at bases around the country.

“I’m really excited to see what’s in store moving forward, how much more I’ll be able to promote the program,” he said.

Jason Gepperth, disability and STEM resource specialist in the university’s Office of Disability Services, said Wright State supplies the third largest number of recruits for the Workforce Recruitment Program in the nation. The office helps students with disabilities prepare resumes, develop interviewing skills and market themselves.

“For us to have that recruiting base is amazing,” he said.

About half of the 70 Wright State students who signed up for the Workforce Recruitment Program were extended an offer at Wright-Patterson.

Fore said she was “blown away” by the high caliber of the interview skills displayed by the Wright State candidates. She said the student interns are extremely focused and detail-oriented.

“You give them directions — and the directions might be five pages long and have all these attachments and steps to follow,” she said. “They are going to follow the directions very precisely — to a T — and get that paperwork turned very quickly.”

“They’re the ones responsible for working on the two-ton chillers that we have, making sure the buildings are appropriately cooled or heated,” said Fore.

And it is not just engineering students. A geography major is assigned to the base’s maps department, and a mass communication major works in the Life Cycle Management Center, which is responsible for managing Air Force weapons systems.

As an extension of the Workforce Recruitment Program, Wright State and Wright-Patterson are also piloting an Autism At Work program. The challenging aspect of a job search for candidates with autism is often navigating social situations, such as the interview process, which could hinder their ability to land a job within their field of study.

In the pilot project, 16 students on the autism spectrum have been provided a yearlong paid internship with trained supervisors and mentors. The goal is for these students to be positioned for success and potential full-time employment at the base.

Gepperth said it is not uncommon for individuals on the autism spectrum to have trouble finding jobs, even with a four-year degree.

“The Office of Disability Services believes strongly in providing the support necessary to ensure our graduates can find success in their desired careers,” he said. “Many of our students on the spectrum are members of the Honors Program and can quote complex concepts like quantum physics off the top of their heads. They have major skillsets to contribute to the workforce.”