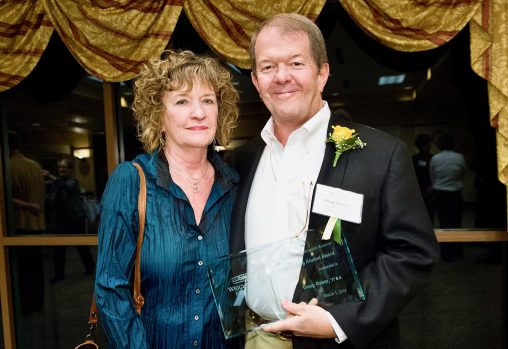 1977 graduate Doug Rasor and his wife, Barbara, hope their newly created scholarship will impact the lives of students, just as theirs was by a scholarship Doug received as a student at Wright State.

Had it not been for one scholarship, Doug Rasor’s life might have taken a completely different path.

As he was graduating from Sinclair Community College with an associate degree in electronics engineering technology, Rasor knew he wanted to continue his education. Even with his GI Bill, the Navy veteran was well aware that covering the cost of tuition at a four-year university was going to be a struggle.

Fortunately, Rasor learned about a scholarship that the Rike family — founders of Dayton’s famed Rike’s department store — had established to encourage Sinclair graduates, particularly in engineering, to continue their studies and earn a four-year degree at Wright State University.

“It really was a life changer,” said Rasor.

The scholarship enabled Rasor to attend classes at Wright State during the day and work at WHIO-TV at night.

Along with balancing school and work, Rasor also had a family to support. He had married his high school sweetheart, Barbara Wissinger, and the couple had a young son, Marc.

Rasor credits both Sinclair and Wright State for giving him practical, hands-on experience that helped him move up the ranks quickly.

“Both degrees really prepared me well for my first job and kick started my career,” he said.

Rasor later landed a job at Texas Instruments, where he worked for more than 20 years in various leadership roles. He retired from Texas Instruments in 2010, after serving as vice president for emerging medical technologies.

To keep his toes in the technology and strategy waters, Rasor serves on the boards of Kitu Systems and Avuli Networks. At Wright State, he is a member of the board of advisors for the College of Engineering and Computer Science. He received the college’s Outstanding Alumni Award in 2014.

His wife, Barbara, is retired after spending two decades in numerous administrative positions at Winters Bank (now JP Morgan Chase) in Dayton, the University of Texas at Dallas and the North American Coal Corporation.

While the couple resides in Santa Fe, New Mexico, they frequently return to their hometown of Brookville, Ohio, where Rasor plays guitar in the 1960s-tribute band, the NOMADS.

In April 2018, the Rasors launched their own scholarship program at Wright State. The Doug and Barbara Rasor Finish Line Scholarship will support transfer students from Sinclair Community College who major in electrical engineering or computer science at Wright State.

“Looking back on my journey through school, I’m not sure I would have been able to get my four-year degree had it not been for the Rike family scholarship,” Rasor said. “We really wanted to try and replicate that, and hopefully our scholarship has a similar impact on others, just as the Rike’s scholarship had on Barbara and me.”

Preference will be given to scholarship applicants who are veterans or currently serving in active duty.

“I’m not sure I would have had the emotional maturity and the ability to commit and succeed without the discipline I took away from the military,” said Rasor, who joined the Navy in 1968. He served for four years, including two in Vietnam.

The Rasors hope their scholarship will impact the lives of dozens of students in the years to come, just as the Rike family’s scholarship forever changed theirs.

“I would hope that some of them will have the same memory of our scholarship as I have with the Rikes,” Rasor said. “And I hope they will use that as a motivation to donate — when their careers have advanced — and continue the legacy.”