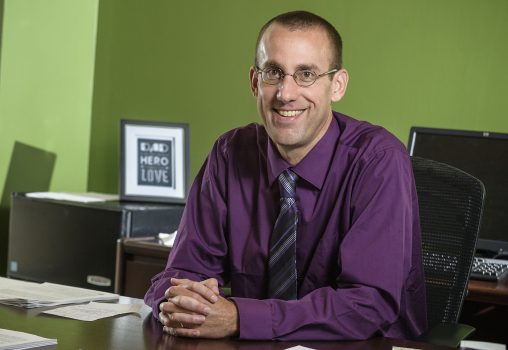 Brian Rigling, interim dean of the College of Engineering and Computer Science (Photo by Erin Pence)

Wright State University’s College of Engineering and Computer Science has a vital impact on the region and is well positioned to advance new initiatives to serve its students and regional employers.

This is the mission of the college under the leadership of its new interim dean, Brian Rigling.

“Engineering and computer science are areas of strong job growth in the region, the state and the country,” said Rigling. “We intend to focus on innovative programs and partnerships to enable strategic growth.”

“Wright State graduates are prominent throughout the region’s tech community,” said Rigling. “The region depends on us to fill critical roles in the workforce.”

The new interim dean is enthusiastic about the college’s numerous strengths: its students are highly employable and generally command the highest starting salaries among all undergraduates; it has a large number of faculty with national and international reputations; its researchers have been winning record amounts of grant and contract funding; and it maintains very strong ties with local industry and numerous collaborations with other universities.

Rigling says he’s committed to taking care of students, faculty and staff in the college despite recent choppy financial waters and shifts in the budget.

“My first responsibility is the caretaking of the college’s academic programs and the careers and professional aspirations of its students,” he said. “We may have to operate a little differently, but I believe the college will be no less effective in educating its students and producing talented and successful graduates.”

Rigling said the college also is looking to expand into new academic disciplines and research areas needed by employers in the region.

Rigling joined the faculty at Wright State in 2004 and served as professor and chair of the Department of Electrical Engineering since 2014. During his time as chair, he initiated the department’s new B.S. in electrical and computer engineering technology and the Ph.D. in electrical engineering programs. In addition, he led a 100 percent increase of the department’s externally funded research awards to nearly $8 million in the previous fiscal year. He is currently director of the National Science Foundation’s IUCRC Center for Surveillance Research led by Wright State.

Rigling is an internationally awarded authority in sensor signal and image processing, with emphasis on synthetic aperture radar and waveform optimization. In 2015, he was awarded the Fred Nathanson Memorial Radar Award by the IEEE, the world’s largest association of technical professionals, and has more recently been elevated to the prestigious grade of IEEE Fellow.

Academically, Rigling has been certified to evaluate engineering programs at universities worldwide by the standard-setting ABET accreditation board.

“This college and its programs will continue to adapt to the changing needs of our students and employers, while embracing new and emerging technologies,” he said.