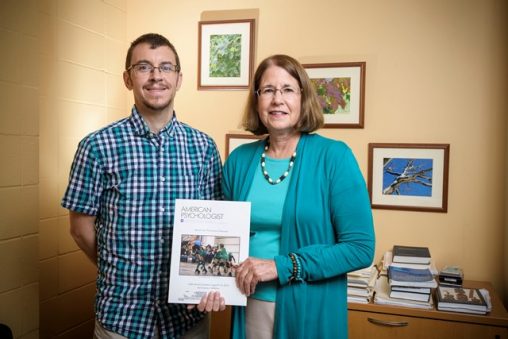 Graduates of Wright State University’s Industrial Organizational Psychology Program have landed jobs everywhere from Amazon to Procter & Gamble to the NASA Johnson Space Center. So it’s no surprise that U.S. News & World Report has ranked industrial psychology as one of the best jobs in 2018.

“If you like psychology, this is one of the areas of psychology that is very employable with a master’s or a Ph.D.,” said Debra Steele-Johnson, professor and chair of the Department of Psychology in the College of Science and Mathematics. “And our students are very close to 100 percent employment.”

To identify professions for the 2018 rankings, U.S. News & World Report started with data on jobs with the largest projected number of openings from 2016 to 2026, as determined by the U.S. Bureau of Labor Statistics. The jobs that topped the list were then selected for the 2018 Best Jobs analysis and rankings.

The magazine ranked industrial psychology as the third best science job behind the top science job of epidemiology, which is working to identify and prevent diseases. The best job overall is software developer.

The rankings took into account the most important aspects of a job, including salary, employability, growth potential, future job prospects and work-life balance. The magazine said industrial psychologists have a median salary of $82,760 and an unemployment rate of only 1.8 percent.

Industrial psychologists apply the principles of psychology to the workplace. They use the methods and theories of psychology to identify how behaviors and attitudes can be improved through hiring practices, training programs and feedback systems.

“They help identify qualified job applicants, train them in a way that’s most effective and assess their job performance, job satisfaction, teamwork and leadership skills,” said Nathan Bowling, professor of psychology. “We address questions about improving the work environment, helping workers be more productive and healthier.”

Wright State’s Human Factors and Industrial/Organizational Psychology Program was launched in 1992, offering a master’s of science degree and Ph.D. Learning facilities include laboratories, audio-visual equipment, observation rooms and 20,000 square feet in Fawcett Hall dedicated exclusively to psychology research. Wright-Patterson Air Force Base and Wright State also have several agreements in place for the sharing of equipment, facilities and personnel.

“One of the exciting things about I/O psychology is that as a science you get to be at the forefront; you get to make discoveries,” he said. “Ultimately what we are doing is training scientists.”

Wright State’s program has been ranked among the top one-third of the 70 established doctoral industrial psychology programs in the United States and Canada.

“We’ve got a good one here,” said Steele-Johnson.

The program has produced more than 70 Ph.D. graduates and at least that number of master’s degree students. Most of the incoming students had bachelor’s degrees in psychology.

“One of our incoming students said, ‘I’ve worked out there, I’ve worked for bad bosses, I’ve received bad training. And I was asked to develop training and realized I needed more information,’” said Steele-Johnson.

Many industrial psychologists work as consultants or with consulting firms.

“Some of our folks could work in a human resources department, but they can work in other parts of an organization also,” said Steele-Johnson. “Strategic planning is a big one for us, as is succession planning. Organizations will often hire folks like us to help figure out how to plan for replacing folks who are retiring, training up new talent.”

Both Bowling and Steele-Johnson believe that one reason for the recent popularity of industrial psychologists is that many organizations are just becoming aware of the field and its value to them.