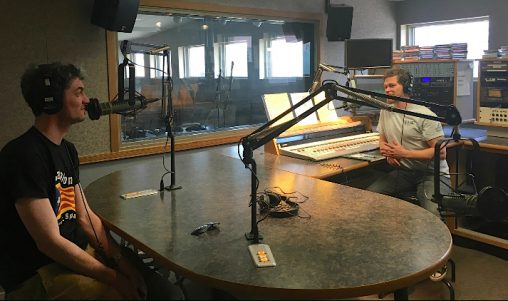 The first episode in the new season of “Veterans Voices” on WYSO features a conversation between Wright State student veterans Pyotr Dobrotvorsky, left, and David Berry.

The new season airs every Wednesday for the next eight weeks during “Morning Edition” at 6:45 and 8:45 a.m. and on Sundays during “WYSO Weekend” at 10 a.m. on 91.3 FM. Each story — as well as episodes from previous seasons — is also available on wyso.org.

“Veterans Voices” is a collaboration between the Wright State Veteran and Military Center and WYSO. The series features stories of Miami Valley veterans talking about their military service and re-entry into civilian life. The stories are reported by Wright State student veterans trained in WYSO’s Community Voices model.

Davis described the fourth season as contemporary and about identity.

“We hear from a very diverse group of veterans, and they talk about what motivates them and what makes them human. We learn what makes each veteran unique while working together to serve our country,” Davis said.

The first episode of the season features a conversation between Berry, an Army veteran and graduate student who was raised in the United States, and Pyotr Dobrotvorsky, a U.S. Navy veteran and Wright State student who was raised in Russia. In a conversation led by Berry, the student veterans discuss their native countries and how their different cultures impacted their military service. Dobrotvorsky also talks about his decision to serve in the U.S. military instead of the Russian military. 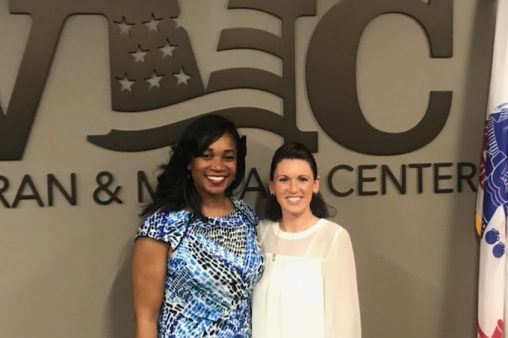 The second episode is a conversation between Army veterans and Wright State students Loghan Young and Ericka Carter about women defying gender stereotypes in the military. In another story, Young, a Master of Public Administration student, talks to her husband, Joe Young, about their experience of deploying at the same time.

Davis said he’s proud of the stories featured in the fourth season. “It’s easy to understand why this is such a popular series. It speaks to everyone,” he said.

The Veteran and Military Center also sponsors its own Veterans Voices Project in which Wright State student veterans interview Dayton area veterans about their military service. Stories are sent to the Library of Congress, archived on Wright State’s CORE Scholar and shared on the project’s Facebook page.

Berry, who is the coordinator of the Veterans Voices Project, said he got involved in the project as a way to hear from veterans who had successful lives after leaving the military. He hoped it would help him progress in civilian life.

“I thought the Veterans Voices Project would allow me to hear from other veterans who had come before me and see what they did right and what they did wrong,” said Berry, who served in Germany for three years and nine months in Afghanistan as an airborne scout.

He said sharing stories is the best way to connect veterans regardless of the era in which they served.

“The Veterans Voices Project is a way to bridge the gap between generations of veterans,” Berry said. “It’s sharing stories. Veterans Voices creates a platform or a guideline for how to go about doing that.”