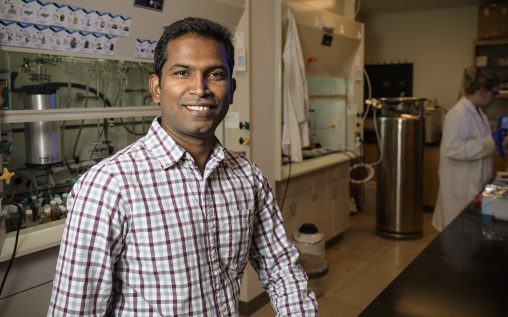 “There are some new results and we’re very excited about it,” said Arumugam.

Arumugam and his team are focusing their efforts on “dual targeting” compounds, which contain both gold and redox-active organic moieties to exclusively amplify specific amounts of reactive oxygen species and protein inhibition within cancer cells to trigger programmed cell death.

“Combining them together is making an effective hybrid drug,” said Arumugam.

The compounds would also include a mechanism that selectively targets cancer cells. The sum total of these features is proposed to give a more effective cancer therapeutic drug.

Currently, chemotherapy is widely used to kill or control cancer cells. But it can also have damaging effects on healthy cells. Researchers have been investigating the use of gold and other metal derivatives as a way to target cancer cells, spare healthy ones and possibly even induce an anti-cancer immune response from the body. 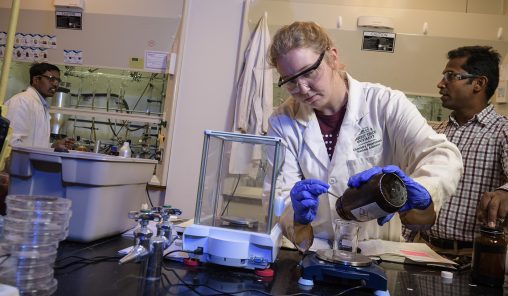 The next step for Arumugam and his team is to test the compound on mice and come up with a way to improve its water solubility so that the next generation compounds can be delivered effectively.

That would effectively make it a new drug that would have to be re-studied. But that process would be accelerated because the protocols used to study the original compound are already in place.

The team also needs to determine if a receptor needs to be attached to the compound in order to target it to specific cancer cells.

Arumugam earned his Ph.D. in chemistry from Tulane University followed by a postdoctoral stint at The University of Texas at Austin. He worked as an assistant professor at St. Bonaventure University before joining the faculty at Wright State in 2015.