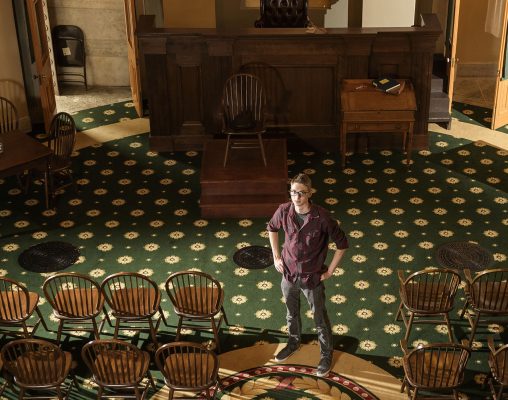 As an intern at Dayton History, Andrew Puthoff played the defendant in a special courtroom drama in Dayton’s Old Courthouse. (Photos by Erin Pence)

He went on trial for murder 10 times last summer and was found not guilty each time. Actually, it was just the re-enactment of a real-life, headline-making murder trial. And the pretend defendant was Wright State University senior Andrew Puthoff.

It all took place at Dayton’s Old Courthouse as part of Old Case Files, actual court cases usually from the late 1800s and early 1900s. The 10 interactive courtroom drama productions were put on in July by Dayton History, where Puthoff interns.

“My favorite thing about the show is that we pull the jury from the audience. We get 12 jurors who could be anybody. They sit through the whole trial. After the closing arguments, they go into a room and deliberate and they deliver their own verdict,” said Puthoff. “I was acquitted every single time. I was not found guilty once.”

Puthoff, who majors in professional writing, spent much of his boyhood in Tipp City. His father is a physician who works at the Veterans Administration hospital in Richmond, Indiana.

“I was always a reader when I was young. I would just soak up all that stuff,” he said.

As a young boy, Puthoff had to be in bed by 9 p.m. but was allowed to read after that.

“I had my little reading lamp and I would read Harry Potter, Chronicles of Narnia, Magic Tree House, Lemony Snicket — all that stuff,” he said. “I read so much when I was probably ages 8 to 14.”

After graduating from Tippecanoe High School in 2014, Puthoff enrolled at Wright State, drawn by its proximity to home and affordability.

Puthoff is a voracious reader of newspapers as well as classic literature. Ernest Hemingway is one of his favorite authors.

“He spent a lot of time as a journalist, which I admire,” Puthoff said. “I find that if I read something by Hemingway and go to write something, I will be neurotically shortening my sentences and taking out my passive voice. And I think that’s good.”

After graduation, Puthoff wants to become an editor.

“But I don’t want to edit for the rest of my life,” he said. “It’s really something that I think I want to do to supplement my writing skills.”

Along his way at Wright State, Puthoff landed an internship at Dayton History, an organization that preserves and displays some of the city’s most precious historical treasures. As a production intern, he was assigned to produce programs for Old Case Files using real-life headlines from the trial and to collect newspaper clippings for the audiences to review. 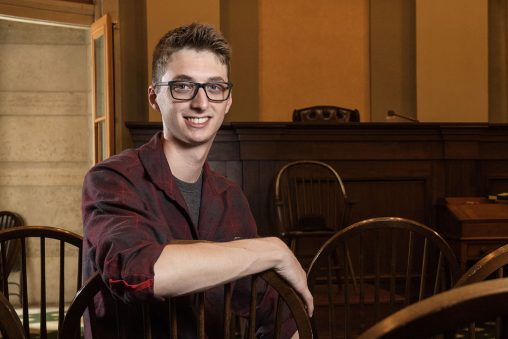 Andrew Puthoff, who majors in professional writing, wants to become an editor after graduation.

Then Puthoff was selected to play “Dayton Slim,” the defendant in last July’s Old Case Files productions. He believes he was picked for the role because he himself is tall and slender, just like the 6-foot-5 defendant.

“It’s the first role I’ve ever gotten for just being tall and skinny,” Puthoff said with a laugh. “I hadn’t done any real theater since I was in high school. It was an itch I hadn’t scratched in a long time. It’s fun just to have an audience for me. I think I have a performative personality a little bit.”

Eight U.S. presidents, including Abraham Lincoln, have delivered speeches at the Old Court House. Its 1850 courtroom comes to life with Old Case Files, high-profile trials that actually took place at the courthouse. Audience members hear testimonies from witnesses, arguments from the prosecution and defense, converse with costumed spectators, study period newspapers and view historical exhibits to uncover the events surrounding the trial.

“We do 10 shows with about 100 seats, and it sells out every year,” said Puthoff. “Every year is a brand new original case with a brand new original script. It’s a unique thing. It really combines historical stuff and theater stuff. For me it’s really cool. I’ve always liked history. But the theater side is what I’m more familiar with.”

This year’s production featured defendant Charles “Dayton Slim” Stimmel, who was accused of fatally shooting the bookkeeper of a feed store during a robbery. Stimmel was convicted in 1903, sentenced to death and electrocuted.

“The actual trial itself was interesting because there was a lot of circumstantial evidence, there were a lot of dubious eyewitnesses,” said Puthoff. “So it is up to the individual spectators at Old Case Files to decide for themselves how they feel about these testimonies.”

Since Stimmel did not take the stand to testify, Puthoff had no lines during the re-enactment. But all eyes in the courtroom were trained on him. He occasionally mumbled to his attorneys and looked upset when certain witnesses appeared to testify.

“It’s the easiest theater role I’ve ever had,” he said.