Searching for his own sound 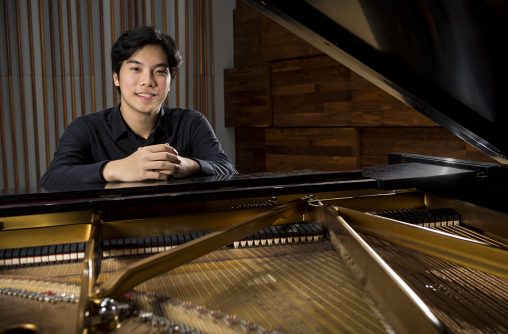 He once quit playing piano in favor of video games. Now Wright State sophomore David Chi Tou Lao is determined to make a name for himself as a pianist. (Photos by Chris Snyder)

David Chi Tou Lao believes in destiny. He found his behind his family’s old piano.

That’s where he found a CD by Vladimir Horowitz, considered one of the greatest virtuoso pianists of all time. Lao became familiar with Horowitz’s work and renowned reputation at a summer piano master class he took in Vienna. The pianist was someone the students were encouraged to emulate. A large photo of Horowitz even hung in the music hall where the students practiced.

Lao, who was in high school at the time, returned home to his native Macau inspired to grow his budding musical skills into a career.

He started practicing every day, took private lessons and asked his parents to buy a new grand piano to replace the upright piano in his family’s home. When they moved the old piano out of the house, there it was — a Horowitz CD, mysteriously collecting dust. No one in the family knew the album had been behind the piano, how it got there or who had even bought it.

“It attracted me into the world of music. It’s like destiny,” Lao said.

Today, Lao is a sophomore at Wright State University majoring in piano performance in the School of Music. He’s determined to make a name for himself as a pianist, and he’s off to a good start.

During his first year at Wright State, he placed second in the age 18 division of the Ohio Music Teachers Association Graves Piano Competition in Columbus, his first competition in the United States.

Then in August, he finished in first place in the adult category at the Second Singapore International Classical Piano Competition at the Nanyang Academy of Fine Arts. He competed against 16 other finalists from various countries. To make it to the finals, he also placed first in the regional round in Ningbo in mainland China.

It was his first major competition, and he didn’t expect to win, saying he thought he had played poorly. The judges thought differently.

He performed Dumka in C Minor by Tchaikovsky and “Liebesleid” (“Love sorrow”), arranged by Rachmaninoff. Both are slow romantic pieces, a style Lao prefers because he can add tone and color and focus on the sound and harmony.

“Those slow romantic phrases are my cup of tea,” he said, adding that they fit his quiet personality. “Slow pieces are deeper.”

Jackson Leung, professor of music and coordinator of keyboard studies, said the School of Music is proud of Lao.

“Following in the footsteps of many other music students before him, David Chi-Tou Lao continued to represent Wright State and the School of Music in the most positive light, locally, regionally, nationally and internationally,” Leung said. 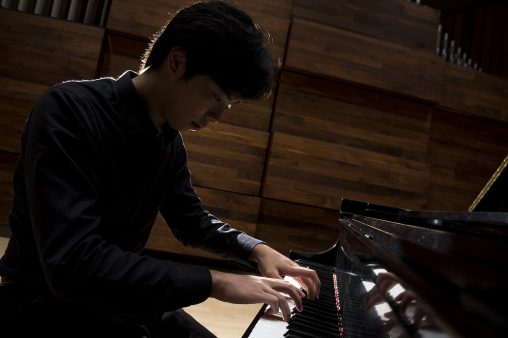 David Lao values the individual lessons he’s received from Leung, his practice time in the piano studio and the seriousness of the School of Music.

Lao decided to enter the Singapore competition with the hope he could begin to make a name for himself. He wants to eventually play with a prestigious orchestra.

Although he learned to play piano as a young child, he didn’t take it seriously and was more interested in video games. By the time he was in junior high, he stopped practicing. But his parents kept encouraging him to keep play.

“I tried to give up many, many times. My mom forced me to continue because my mother and my father always said once you begin you have to finish it,” he said.

After his mother encouraged him to attend a music institute in Macau, Lao decided to take a master class at a summer program in Vienna. The atmosphere was serious, his professor was very good, and the musicians were inspiring. The experience changed him.

He also knew he was at a point in his life where he needed to start thinking about his future, and music was calling him. That’s when he found the Horowitz album and his destiny.

Lao decided to attend Wright State based on a recommendation of his piano teacher, who knows Leung, who is also from Macau. Attending college in the United State also offered Lao a chance to improve his English and experience American culture.

Lao values the individual lessons he’s received from Leung, his practice time in the piano studio and the seriousness of the School of Music. This year, he joined the Wright State Chamber Orchestra.

Meanwhile, he continues following his parents’ advice by practicing as he develops his own sound.

“When you explore the music, every single piece, every score, every process, every step, when you explore it more you find out how little you are,” he said. “It is a process of being more humble, being more educated, feel more deeply. You develop your own style and keep improving for a lifetime.”