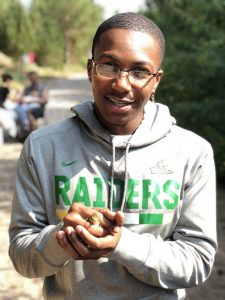 Wright State psychology students traveled to Poland to study the behavior of animals in the wild and at a zoo. They spent three weeks studying the migration patterns of birds, daily behaviors of different apes and the reactions of seals to different stimuli.

The trip presented a life-changing opportunity for psychology majors Joshua Hatch and Jeremy Greene, the first African American male students to participate in the trip.

“There’s people who never even get to travel outside their city or state, let alone the country, that was amazing to me. If I could enable more people to have the opportunity, I would,” he said. “I think me going opens the door to people who are either afraid to go. I was afraid to go, but that’s what I really enjoy about that opportunity — I can encourage other people to go.”

The students visited the University of Gdansk, where toured the campus and interacted with Polish students. Greene said some of the Polish students majored in American studies and were studying historical events such as the 1990s riots, based on race and equality, as well as comparing current Black Lives Matter activity to Martin Luther King Jr. and Malcolm X.

“The only time we studied anything like that here was during Black History Month,” Green said. “They seemed to understand American culture almost more than we understand it.” 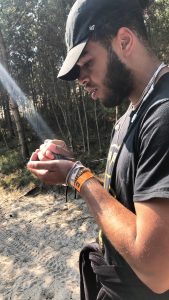 Jeremy Greene was among the psychology students who traveled to Poland to study the behavior of animals.

Joy Wanderi, associate director of the University Center for International Education, said studying abroad is a great way for students to learn more about the world and different culture.

“What we’ve seen, a lot of students come here and they’re timid, but when they study abroad they become more confident. Studying abroad is a student success initiative,” she said.

Debra Steele-Johnson, chair of the Department of Psychology, said she was delighted that Hatch and Greene were able to go on the trip.

“I believe this trip had an important influence on their lives both academically and personally. I believe most students would benefit by participating in an education abroad experience, and I hope that the Department of Psychology can help more students access these opportunities,” she said.

“I recommend going abroad any student who has the ability,” he said. “It greatly increases the academic value of their education, but it also increases general value and helps them exist in the modern world.”