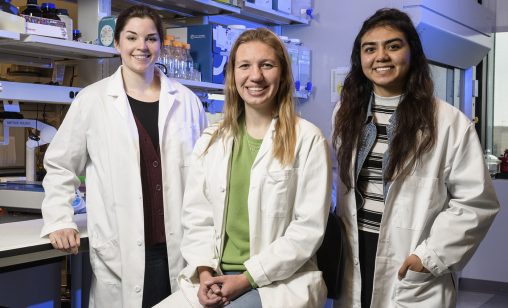 The Considine Scholars Program, which awards $5,000 apiece to each selected scholar, is in its third year.

In addition to conducting research in the labs, the scholars created a seminar course to address and examine gender issues in STEM. Titled Misconceptions of Gender Differences in STEM, the course is open to students of any major.

“I’m so excited about the course and the scholars being the ones who decide what the course is going to be about every semester,” said Kathrin Engisch, associate chair of the Department of Neuroscience, Cell Biology and Physiology. “It’s a course people can take again and again.”

Meiring said response to the course has been inspiring.

“I really like that we had some nontraditional students who went out and had jobs and came back to college,” she said. “I feel like they provided a bigger perspective on women in STEM than I would have gotten otherwise.”

Engisch said the Considine Scholars Program is the brainchild of Dick and Michael Considine, who both work in STEM fields and want to make them more welcoming to women.

“They thought the best way they could do that was to give women undergraduates experiences that would increase their resiliency and confidence and keep them in the field,” she said.

“It enables a research project to happen that might not have happened otherwise,” said Engisch. “And it’s providing a work opportunity that gives the students an experience that will increase their success going forward.”

Lesko said her mother fostered her curiosity in science. After graduating from Beavercreek High School in 2015, Lesko enrolled at Wright State because of its opportunities in undergraduate research.

“I think it would be a lot more difficult to find that kind of opportunity at a really big university,” she said. “I think that’s something really special that Wright State has.”

Lesko said being a Considine Scholar has given her a chance to focus on her studies and research without having to work a part-time job. The award also enabled her to attend a scientific conference in Madison, Wisconsin, where she presented her research on genes required for the reproductive systems of planarian flatworms.

Lesko is applying for Ph.D. programs and is interested in microbiology.

Meiring graduated from Marion Local High School in 2015 as valedictorian and came to Wright State with the idea of eventually pursuing her doctorate in neuroscience.

“Since Wright State has a very good neuroscience program and a lot of faculty doing things, it was a good place to do undergraduate research,” she said. “And it’s small enough that you can make connections with faculty researchers and get into a lab.”

Meiring works in a behavioral neuroscience lab studying how stress affects the brain, specifically the release of hormones following stress among different ages and sexes.

She is ultimately interested in neuro-imaging, possibly doing brain scans to study the prefrontal cortex, which contributes to personality development, and to examine plasticity, the brain’s ability to change throughout its life.

Gomez came to Wright State after graduating from Tecumseh High School in 2016 as salutatorian of her class. She is interested in pursuing a career in medical research.

“Women aren’t really encouraged to follow careers in STEM,” she said. “I want to help contribute to having more women join programs.”

“Our ultimate goal is to make STEM gender neutral — like no one is talking about women in STEM anymore,” said Engisch. “That would be success.”