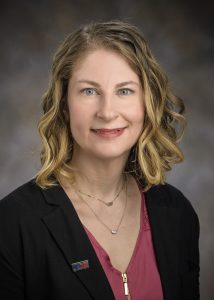 Amanda Watkins, associate director of the Veteran and Military Center, received the 2018 President’s Award for Excellence in Service for her dedication to student veterans.

Watkins was originally hired by Registrar’s Office, but shortly after she joined the university, she was asked to process GI Bill benefits. Her twin brothers were serving as infantry in the U.S. Army, so she applied for the job.

She was initially asked to fill in on a temporary basis. More than 12 years later, she continues to work with student veterans. She is responsible for over a decade of near-perfect audits by the Department of Veteran Affairs of the university’s handling of GI Bill benefits for Wright State students.

In 2009, when the post-9/11 GI Bill went into effect, Watkins’ workload increased exponentially. However, she was continually successful at keeping student veterans’ benefits flowing, ensuring their tuition was paid and monthly housing allowances were distributed on time. Watkins’ work on GI Bill processing ensured that Wright State received millions of dollars in tuition benefits.

Watkins, along with the other Veteran and Military Center staff, serve over 750 students who receive tuition through the GI Bill, with approximately 300 students who are military veterans, guard members, reservists or active duty attending Wright State. The VMC advocates for student veterans in a variety of ways, such as providing veteran-specific classes and a veterans affairs minor.

As the associate director of the Veteran and Military Center, Watkins advocates for student veterans and military-connected students. She is responsible for managing the student veteran experience and supervising the center’s peer mentoring program, academic initiatives and women-centered programming. She also assists student veterans with academic advising to help them throughout their college career. She assists university departments with veteran and military-connected training, ensuring students are able to take class time off for temporary duty assignments, Guard training and mitigating personal situations such as a death in the family or an illness.

Watkins worked closely with Carl Brun, assistant vice president for curricular programs, to develop a prior learning assessment tools for student veterans and with the College of Nursing and Health to develop the Accelerated Nursing Program for military veterans with medical backgrounds. She has also served on the Unclassified Staff Advisory Council.