The greens and blues of nature have come alive on the walls of Miami Valley Hospital South. Three large, pond-inspired paintings by Wright State University alumna Jennifer Rosengarten hang high in the atrium of the hospital’s Joint and Spine Center, a new treatment facility at the hospital’s campus in Centerville.

“It’s about energy and light and color,” said Rosengarten, adding that she hopes hospital patients and visitors become absorbed in the paintings’ colors and take away something positive. “I think it’s great that the hospitals and corporations want to have real art.”

Rosengarten should know. Her art has also been displayed at hospitals and corporations in New York City, Cincinnati, Houston and even Costa Rica. She also recently had exhibitions at the Springfield Museum of Art and Art Access in the Columbus suburb of Bexley.

Her latest installation at the hospital spine center, which features sports medicine, sports performance, pain center services and chiropractic medicine, was unveiled during a Nov. 27 ceremony. It consists of three large paintings inspired by ponds and floating aquatic lotus flowers.

“I would call them plantscapes more than anything,” said Rosengarten. “You can see there is really no horizon line. And they are not about a particular place. They are composites of many different things and not times of day. They are based on far more abstract ideas, what colors, what forms work together in painting.” 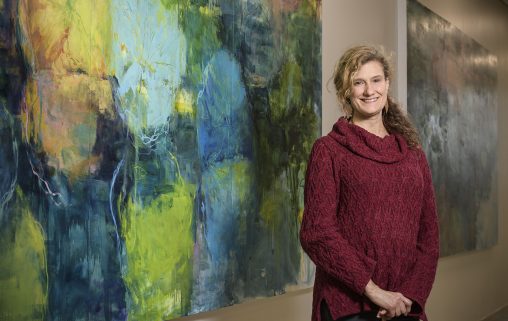 Jennifer Rosengarten, who received her bachelor’s degree in painting from Wright State, was commissioned to create paintings for Miami Valley Hospital South. (Video by Kris Sproles / photo by Erin Pence)

Rosengarten grew up in Beavercreek and remembers getting her first set of oil paints when she was in first grade. She also remembers being mesmerized by a reproduction of Van Gogh’s sunflower painting that hung on the kitchen wall.

“I used to just stare at that,” she said.

When Rosengarten enrolled at Wright State, she declared economics as her major. But that quickly changed after she took a drawing class and won a scholarship that led to her bachelor’s degree in painting in 1989.

Rosengarten said Wright State was hugely influential and gave her a solid grounding in drawing, painting, color and techniques.

“And the teachers were really wonderful and supportive,” she said. “A lot of the students got into really excellent graduate schools. I couldn’t be more pleased or grateful.”

After graduation, Rosengarten worked on her portfolio, won a scholarship to Boston University and in 1993 earned her master’s degree in painting. She later lived in Providence, Rhode Island, before moving to Taos, New Mexico, where she resided for three years.

“You can’t not paint the sky there,” she said. “It gave me a sense of expanse.”

But Rosengarten was lured back to Ohio by its green and vibrant landscapes. Over the next 12 years, she taught painting and drawing, mostly at the University of Dayton. She recently transformed her garage into a studio that enables her to create large paintings.

“I work large and I love working large,” she said. “I can throw up that big door and all the light comes in. Our house is surrounded by green.”

Rosengarten was introduced to the Miami Valley Hospital South project as a member of The Contemporary Dayton (Visual Arts Center). A donor selected and sponsored her work.

To meet the deadline, Rosengarten worked on the three paintings 12 to 15 hours a day seven days a week. She finished them in 10 weeks.

Rosengarten wants hospital patients and visitors to be enveloped by the paintings and to be moved by the sense of color, light, movement and peace. She says the art looks much different now than it did in her garage studio.

“When you actually see it on a clean wall without all the paint cans and clutter around,” she said, “you think, ‘That’s not so bad.’”