Opening the doors of opportunity 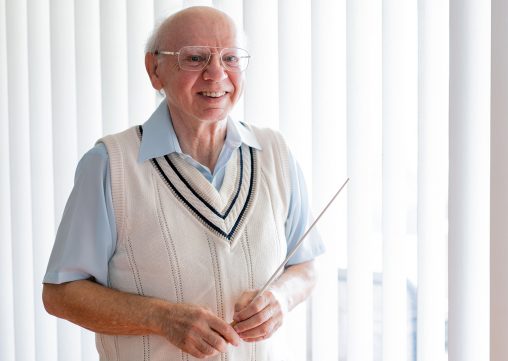 As the sounds of Ravel or Gounod resonated through his classroom, Pierre Horn couldn’t help but get caught up in the moment. He would become so enraptured with the music of his native France that he would begin conducting the orchestrations with his hands. At the end of the quarter, the students in his French culture class presented him with a conductor’s baton.

“I still have it,” said Horn. “Each time I see it, I’m reminded of that class and its wonderful students.”

Listening to the French composers with his students is one of Horn’s favorite memories from his 24-year career at Wright State University. It all began when he came to Wright State in 1975 as an assistant professor of French. With the university still in its infancy, Horn was one of only two professors teaching French language, literature and civilization. He would witness tremendous changes in his department, college and the university in the years to come.

“The largest employer near the university was Wright-Patterson Air Force Base,” Horn noted, as he recalled his earliest days on campus. “Actually, there was nothing but vacant land on the other side of Colonel Glenn Highway. The campus comprised four academic buildings, known as the Quad. The library had just been finished.”

Like the university, Horn’s beloved French program grew in size and scope over the years. “It became quite a good program,” he said.

Horn relished watching his students, some of whom came with very little knowledge of French, improve in their proficiency of the language.

At Wright State, Horn would receive several special recognitions for his work, both inside and outside the classroom. He was honored with the Best Teacher Award by the College of Liberal Arts and received the Presidential Award for Outstanding Faculty Member for overall contributions to teaching, research and professional service.

He was also named the Brage Golding Distinguished Professor of Research. “That was a great honor,” said Horn. “It came with a generous stipend that allowed me to do research at other universities.”

To express his gratitude to Wright State, he recently established a scholarship for students majoring in French.

“Wright State, via the Department of Modern Languages and its [former] chair Anni Whissen was very good to me,” said Horn, “so I felt that the minimum gratitude I could show was to give some support to students.”

While Horn was initially thinking about making a bequest in his will to fund the scholarship, he decided that he wanted to experience the joy of seeing his scholarship impact the lives of Wright State students. By making his gift now, his first scholarship will be awarded to a deserving student this fall.

Horn hopes his scholarship will encourage students to study French and travel to France or to Quebec in Canada to improve their speaking ability. Ideally, he would like to see his scholarship recipients go on to teach French in high school or college or to further their education in graduate school.

Horn also encourages students to think about pursuing a double major in French and business so they can work in the marketing department of a global corporation. “Students can utilize their degrees in French to make their lives better as well as to help improve their school, university or company,” he said. 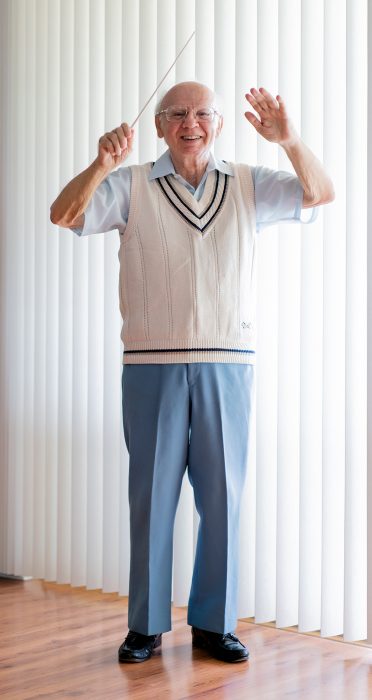 Pierre Horn shows off the conductor’s baton his students gave him as a gift.

A firm believer that foreign language skills make graduates more well-rounded and marketable, Horn knows from personal experience how the ability to speak several languages can open doors. Emigrating to the United States in 1959, at almost 17, Horn arrived from Paris with his mother and older brother. His father passed away during World War II. The Horn family settled in New York City, where they had close relatives, some of whom had come to the U.S. before World War I.

Horn worked for a French bank on Wall Street and went to school in the evenings at Brooklyn College, where he earned a bachelor’s degree in English. He would later graduate from Columbia University with a master’s degree and Ph.D. in French. In 1975, he received an MBA from Clark University in Worcester, Massachusetts, where he also taught French.

“If I had not decided to go into teaching, I probably would have stayed in that French bank,” Horn recalled. “I would have helped the French executives to understand how Americans think and do things in business.”

In 1978, the French government honored Horn with its Chevalier of the Ordre des Palmes Académiques, a national order established by Napoleon to recognize distinguished academics and figures in the world of culture and education. Recipients of the award are given a violet ribbon to wear on the lapel of their suit jacket to indicate this honor.

“They call it a ‘knighthood,’ but it isn’t the same as a British knighthood, which is rather more elevated,” he said.

Aside from his favorite pastime of reading, Horn jokes that he does very little since retiring from Wright State in 1999, although he has been known to whip up a boeuf bourguignon or cassoulet in the kitchen from time to time. Having commuted back and forth between Dayton and Florida for a number of years, he and his wife relocated permanently to the Sunshine State in 2017.

It is Horn’s sincere hope that his academic experience and very American story will inspire others to give to Wright State as well.