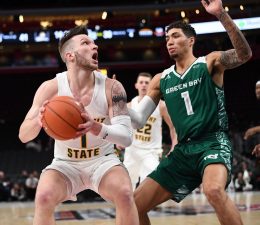 Wright State coach Scott Nagy doesn’t know the level of competition his team will face in the three basketball games it plays during the Raiders’ 10-day trip to Italy, which begins Friday.

But he and his players do know they’ll be facing one famed big man who easily dwarfs their own powerful presence, 6-foot-9 Loudon Love.

The guy who’ll tower over them in Florence stands 17-feet high, is made of marble and is over 500 years old.

David, the Renaissance masterpiece sculpted by Italian artist Michelangelo, now stands quite magnificently in the Galleria dell’Accademia, a place the Raiders will visit.

They’ll also tour the Colosseum and the Vatican in Rome, see the Leaning Tower of Pisa, traverse the waterways of Venice on gondolas, visit Lake Como and a few other sights.

But they won’t be just another band of gawking tourists, they’ll be student athletes with the emphasis – regardless of the three games they play – on the former.

Nine of the 16 players on the trip – all of them underclassmen who use it as an elective – will be taking a one credit, mini study abroad course touching on Italian history, art, architecture and culture that will be taught by veteran WSU professor Susan Carrafiello.

The group already has met with her for classes on campus and been given a variety of reading assignments.

In Italy, the nine – accompanied by the rest of the team – will take various excursions with Carrafiello, who previously has taken two other WSU groups around the country.

The players taking the class will write short papers and will keep a daily journal.

The Raiders seem to be embracing the idea of the study abroad opportunity or at least they are pragmatic.

As redshirt sophomore guard Jaylon Hall put it: “If I have to write a journal to get a trip like this, that’s fine. I mean it’s a free trip to Italy. I think it will be great.”

From her previous experiences, Carrafiello thinks so, too:

“In the past, the most exciting thing for me has been to see the reactions of the students. You’ll tell them about these places that maybe they’ve seen pictures of or just heard about. But there’s nothing that can replace the experience when you’re walking to the location.

“I remember walking in Florence and the students looking up and seeing the dome of the main cathedral there. The look on their faces when they saw it for the first time was just priceless.”

The NCAA allows schools to take one international trip in the summer every four years.

Wright State has taken just a few since it first fielded a school-sponsored team 50 seasons ago. In 1985 – when its basketball was still at the NCAA Division II level – the Raiders went to Germany. Five years later – as a D-I program – WSU toured Sweden and Denmark.

It’s only trip since then was in 2011 when the head coach was Billy Donlon and the Raiders made another 10-day trek through Italy, playing four games.

The team was supposed to return there in the summer of 2015, but Donlon admitted he canceled the trip in response to several off-the-court incidents that had involved some of his players in the summer prior.

He felt their behavior didn’t warrant any reward.

WSU associate athletic director Jeff Giles said this trip is “totally privately funded through donations. We have some staff going too and they have paid their own way.”

Over the years WSU players have had a special embrace of Italy.

Bill Edwards, the program’s all-time leading scorer and rebounder, played for teams in Verona, Varese, Rome and Bologna during his 13 years overseas. He lived in Italy in the off-season some years and spoke Italian.

DaShaun Wood, the program’s second all-time leading scorer and, like Edwards, a WSU Hall of Famer, played in Cantu and in 2008 signed a multi-million dollar contract to play for Trevisio Benetton.

And Raider great A.J. Pacher has played for Italian teams in Legnaro, Reggio Calabra and Sienna. He just recently signed to play for a team in Treviglio.

On the current Raiders team only Aleksandar Dozic and Bill Wampler have been to Italy.

Dozic, a grad student transfer from Marist, grew up in Montenegro just across the Adriatic Sea from Italy. He said he’s been to Italy once and after this tour he will go back home to Podgorica, Montenegro, for 10 days before returning to WSU.

Wampler was part of a basketball tour that had stops in Denmark and Italy when he was a freshman at Drake University.

“We had a Danish teammate so we flew to Demark for two days and then we went to Italy for eight,” he said.

“It was a good team-bonding experience. It was my freshman year and I got to know a lot of my teammates better. The teams we’re going to play might not be the best teams, so it’s about the bonding experience and experiencing a different culture together. And there’s always plenty of laughs because there are a lot of things you don’t know.

Since transferring to WSU, Wampler played last summer in Brazil with an Athletes in Action team and went to Cancun, Mexico with the Raiders for a tournament last season.

Carrafiello said she senses a real curiosity about Italy from several of the players and redshirt freshman Grant Basile admits he’s one of them.

He’s Italian-American – his great grandparents came from Italy, he said – and when his dad remarried, he did so in Venice.

“Every Christmas our family gets together and my dad’s cousin makes these things called spadini (paper thin beef rolled in breadcrumbs and olive oil and made into kebobs) and rice balls,” he said. “I look forward to that every year.”

Jaylon Hall’s cousin Tony Williams – whom he lived with in high school while he was being coached by him – spent part of his long pro career in Italy after being a 1,000 point scorer at the University of Louisville.

“He can really cook pasta,” Hall said. “I want to see the place he learned it.”

Love said he is looking forward to the Italian coffee and the food, but with him there is one catch.

Since last season he has been drastically reshaping his body. He weighed 270 last year – down from his 315 pounds as an incoming freshman – and now weighs 250.

“You’re going to look like an Italian model,” he was teasingly told.

“I can only hope,” he said with a laugh, then a nod to his old self.

“Italy prides itself as a country in its food and I’m looking forward to it.”

Giles said while he’s heard Nagy talk about this trip on a few occasions, he’s rarely heard him talk about the basketball aspect of it:

“It’s almost like the basketball is secondary. He believes you can really wear these kids out too early if you are not careful. It’s a long season. For him, I believe this is much more about being together as a team.”

Carrafiello said in her observations of Nagy – who last summer took his team to the Dominican Republic to do volunteer work, just as he once took his South Dakota State team to Haiti to do the same – she sees someone “who sees this as a whole person education rather than just an opportunity to enhance fundamental skills of basketball.”

She hopes the players on this trip – with the classwork, the excursions and the personal interactions – will follow their coach’s lead:

“This will be a whirlwind. Hopefully the students will learn some things and it will pique an interest to one day come back and learn more.”

Even before this tour that’s happening with Nagy, who is making his first trip to Europe

“I’m really excited about this and, God willing, my wife and I are going back in May,” he said. “We’ll go to Budapest (Hungary) because my name is Hungarian and then we’ll drive through Germany and Switzerland and come to Italy to meet friends.