Washington Post: When the Dayton shooter killed his sister, he cut short a life full of promise, friends say 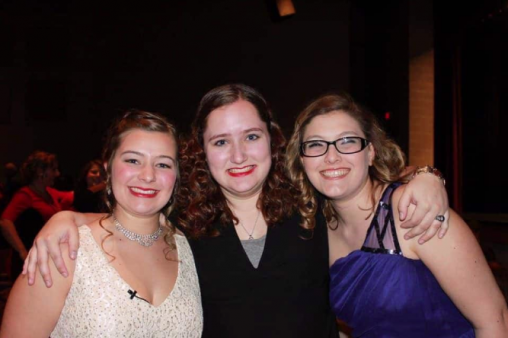 Megan Betts, middle, poses with friends after Bellbrook High School’s production of “Anything Goes” in 2015. (Courtesy The Washington Post)

When the alleged Dayton shooter Connor Betts opened fire in a crowded and historic nightlife district over the weekend, killing his 22-year-old sister along with eight other people, he cut short a life full of promise and warmth, according to friends, colleagues and teachers.

Megan was a stellar student, popular with peers and beloved by most everyone who spent time with her, whether in school band practice sessions or touring the wilds of Montana. This fall, she would have entered her senior year at Wright State University, a public school in Dayton, Ohio, where she majored in earth and environmental sciences and sang in the school chorus.

“Megan was always a standout, she was extremely bright,” said Elizabeth Greenawalt, 63, whose three children attended Bellbrook High School around the same time as Megan.

People from all different parts of her life said Megan was defined by a fervent desire to help others. Her selflessness left a mark: Those who lost touch with Megan years ago grew teary recounting their memories of her.

“She just had the brightest blue eyes and the brightest smile, she was the kind of girl who could just light up the room,” Destefani said. “I was really blessed to know her.”

“I don’t think she had a mean bone in her body,” said Addison Brickler, 23, who rode the school bus with Megan for years.

Destefani’s stories date back to early childhood. She and Megan attended Stephen Bell Elementary School in Bellbrook, Ohio, traveled to girl scout camp together and spent hours playing with “little fairy dolls” in Megan’s room, Destefani said. Megan, who always wore bright colors as a child, adored fairies and unicorns, according to Destefani.

She also loved walking through the woods and learning about the environment with her girl scout troop, a hobby that may have led to her choice of major at Wright State, Destefani said.

Megan’s passion for science became clear in high school, said Zoe DeAtley, 20, who was close with Megan at the time. Megan particularly enjoyed that subject, as well as mathematics, and was talented in both fields, DeAtley said.

“I was really bad at math and science, but she would sit there and help me,” DeAtley said through tears. “She always offered help with schoolwork if someone needed it.”

Outside of the classroom, Megan acted in theatrical productions and joined the Bellbrook band, where she earned a reputation as everyone’s “big sister,” DeAtley said. DeAtley performed alongside Megan, who played the trumpet.

Megan was legendary among band members for her willingness to help anyone with absolutely anything — it “didn’t matter if you were a freshman or a senior,” DeAtley said. Everyone knew to go straight to Megan if they were in trouble or feeling down.

“She never let anyone feel left out,” DeAtley said.

In her free time, Megan listened to bands such as Fall Out Boy and Panic! at the Disco, DeAtley said. When she reached college, she kept up her love of music by joining the Wright State choir.

Steven Aldredge, a longtime pianist for the Wright State chorus, said it can be hard to keep track of the scores of students he has played with over the years. But when he saw Megan’s face in the news, he “immediately realized who she was”: That “sunny, upbeat” demeanor was unmistakable, he said.

James Tipps, a professor of music at Wright State and the chorus’s conductor, said Megan had “a good, strong voice” and a preference for the lowest alto parts. Her favorite works of music included Felix Mendelssohn’s “Elijah” and Gabriel Fauré’s “Requiem.”

She was a perfectionist who wanted things to be done well, and was unafraid to speak up if performances failed to meet her standards, he said. But she was also warm and welcoming to younger singers.

“It is hard to think of coming back to rehearsals without Megan,” Tipps said. “She is what great choirs are made of.”

Chad Hammerschmidt, the professor and interim chair of the earth and environmental sciences department in which Megan studied, said the school is struggling to process her loss.

“She was a wonderful person and student,” Hammerschmidt said. “This is a very difficult time for our community, university and academic department.”

Megan spent the last months of her life as a tour guide helping visitors explore the wilds of Montana, said Daniel Cottrell, her former supervisor at the Missoula Smokejumper Visitor Center. Cottrell said Megan was a “very positive person.” She earned a reputation for competence and was well-liked by her peers, Cottrell said.

She also loved exploring new places, he said, especially Montana and its culture.

“She was full of life and really passionate,” Cottrell said. “She was a very caring individual.”

As DeAtley mourns, she is seeking comfort in a picture Betts drew of the two of them, along with several other friends. It was a Christmas present.

“I cried when she gave it to me, and now it means so much more,” DeAtley said.

Destefani, meanwhile, is holding onto a memory. She keeps thinking back to girl scout camp, when she and Megan found a novel way to survive a frigid day.

“We just spent the whole day walking around with our arms around each other,” Destefani said. “We were warm and happy.”

View the original story at washingtonpost.com