Amidst tragedy, Wright State grad student finds a way to give back 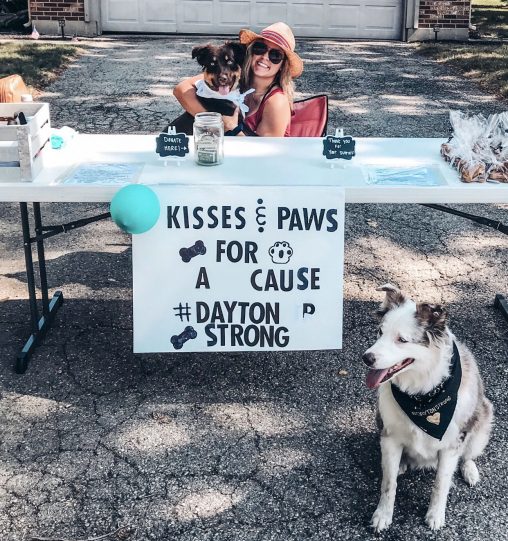 Brooke Evans, a school counseling graduate student at Wright State, passed out homemade dog treats and offered pets and pictures with her dogs Oakley and Miley to raise funds for the victims of the Dayton mass shooting.

Like so many others, Brooke Evans woke up on the morning of Aug. 4 in complete shock. Nine people had been killed during a mass shooting in the Oregon District in downtown Dayton. The news caught the attention of the entire world and left the community of Dayton grieving for all the loss of life.

Evans, a school counseling graduate student in the Wright State College of Education and Human Services, wanted to find a way to help the community in what was unimaginable devastation so many people were feeling.

“I think just like a lot of us were wondering, what can I do to help?” she said. “I thought about going down to the Oregon District, which I did, to lay some flowers and pay my respects, but I really wanted to do something that was going to be impactful.”

It was with this thought I mind that Evans started brainstorming how she could make a difference. It didn’t take long for her to look down at her two Australian shepherds, Oakley and Miley, and realize the answer was sitting right in front of her.

“I thought, ‘Hey! You guys make me happy!’” recalled Evans, who also received her bachelor’s degree in rehabilitation services from Wright State.

With this, Kisses and Paws for a Cause was born. Evans started giving out free homemade dog treats, while also making her dogs available for petting and pictures, as a way to collect donations for the Dayton Oregon District Tragedy Fund, which was created by the Dayton Foundation to raise funds to help the families affected by the shooting. Evans’ endeavor was so successful she was invited to the Miami Valley Music Fest Aug. 9-10 in Troy to set up a stand to raise more funds.

Evans says she’s grateful for all of the support she has received with Kisses and Paws for a Cause and points out all who contributed to her efforts.

“Everyone has been so supportive,” she said. “I’ve had family members who have let me borrow a table and pop-up tent. I had friends and family who sat with me all day long for three days out in the heat to show their support. I had neighbors let me use their yards to post signs and get more traffic. It has been unbelievable.”

Evans has raised $1,138 for the Dayton Oregon District Tragedy Fund, all from an idea to share her adorable dogs and unyielding love for Dayton.

“Dayton might not be the biggest city in the country or have all of the other things that these huge cities have, but I’ll tell you one thing, we sure as hell know how to come together and be there for each other, and there is no other place I would want to live,” Evans said. “Dayton has some of the best people I have ever come across, and when things go wrong, we lift each other up and stand together.”