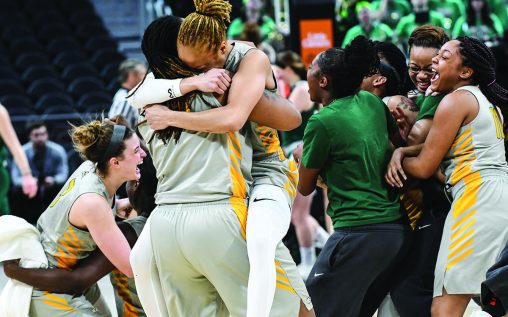 Mani Partlow and Michal Miller embrace after the women’s basketball team clinched the 2019 Horizon League title and earned a trip to the NCAA tournament (Photo by R. Keith Cole)

Coaching has been in Katrina Merriweather’s blood for most of her life, long before she was named head coach of the women’s basketball team at Wright State.

Her father played basketball at Purdue and the University of Indianapolis before establishing a youth mentoring organization, The Family. The organization gives inner-city kids ages 10 to 18 the opportunity to earn a post-secondary education that includes a basketball scholarship.

“His training sessions were unorthodox, but they worked out pretty well,” Merriweather said. “He’s always been really good at player development. That was always an emphasis, and then he put me in a position to coach teams throughout my high school career — coaching the younger kids.”

In 2016, former Wright State coach Mike Bradbury took a job at the University of New Mexico after leading the Raiders to new heights by compiling a 128-73 record and earning the program’s first-ever NCAA tournament bid in 2014.

After being an assistant coach on Bradbury’s staff for six seasons, Merriweather was handed the torch to succeed him. With the foundation laid, the next step was to build upon it.

“Everybody’s goal is to create something special,” she said. “In my case it was already there, so the goal was just to keep it special.”

In Merriweather’s first season at the helm in 2016–17, the team went 25-9, received Top 25 votes, made the National Invitation Tournament (WNIT) and Merriweather received Horizon League Coach of the Year honors. The following year, the Raiders posted a 23-11 mark, made the finals of the conference tournament and received another WNIT bid. Wright State’s 62-44 defeat in the 2018 league tournament title game against Green Bay stung, however.

After splitting the two regular season matchups with the Phoenix in 2018–19, the Raiders did a good job of concealing the fact that they might want another shot at Green Bay.

Wright State rolled past Oakland in the quarterfinals 83-60 and snuck by IUPUI in the semifinals with a strong fourth quarter, winning 60-51. Waiting for the Raiders in the finals would be none other than their familiar foe, the Phoenix. 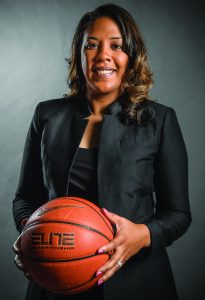 At the half, the Raiders led 27-16, but Green Bay would respond quickly with a run of its own. The lead would change hands several times during the second half in true nail-biting fashion.

With just 1:32 remaining, the score was deadlocked at 49. During the Raiders’ next possession, the ball was in the hands of senior guard Emily Vogelpohl, a four-year starter. With ice water in her veins, Vogelpohl hit a jumper to push Wright State ahead 51-49 with 1:06 to go.

“I think Emily is probably the one who sacrificed her scoring, but she led our team in assists. She just changed the role she had in previous years,” Merriweather said. “All that mattered to Emily was that we won.”

The Raiders sank a few clutch free throws down the stretch and held on 55-52 to capture their second-ever Horizon League tournament crown and a bid to the NCAA tournament.

The following Monday, in front of cheering team supporters in the Student Union, the Raiders were announced as a No. 14 seed to face third-seeded Texas A&M in College Station, Texas, that Friday. When the selection was made official on ESPN, the players jumped with joy.

“The excitement is about seeing your name pop up on that screen. Their reaction was priceless,” Merriweather said.

“We’re really excited to be here,” Merriweather said at a press conference the day before the game. “It is a great place to be right now.”

Texas A&M seized the momentum to start the game and went on to hand Wright State an 84-61 loss. However, Merriweather had already made it more than clear that she was the right choice for the job when hired as head coach three years ago.

“I’m very, very proud of this group,” Merriweather said. “They just played one of the top 15 teams in the country.”

One of the major storylines of the game was Vogelpohl’s broken right wrist, sustained in a practice session just six days earlier. It was kept secret until after the defeat. Though at times in excruciating pain, she fought on the court for 22 minutes against the Aggies.

“Emily, over her four-year career, has proven that she deserves to be on that floor. I was never going to sit her as long as it didn’t hurt her further,” Merriweather said. “Once they answered the question that she could not hurt herself any more, then I knew that she would play and that she would want to play.”

One constant Merriweather says contributes to a successful program is the unwavering support of the athletic department staff members.

“From top to bottom, the administration just creates an environment where it’s really genuinely a family, where our first goal is to take care of these kids. I think that’s what makes this place unique,” she said.

Pinpointing specific people in her support network can be tough, Merriweather added, since it is so far-reaching. Her grandmother, for instance, is in her 80s but won’t let distance get in the way of her driving to watch the Raiders.

It could also be people like one of Merriweather’s best friends, Ronita, who would send her the song “Big Rings” by Drake and Future as a source of motivation throughout this season. There are lyrics like, “I got a big team” followed by, “They need some really big rings.”

Coach Merriweather says the Raiders’ successful 2018-19 season was due to her players’ decision to ignore distractions, work hard and come together as a team.

“It would be about once a week maybe, and it’s just this song that talks about championships,” Merriweather said. “She was the one person every time we talked who said, ‘Stay the course. You were born to win a championship.’”

When the 2018–19 season began, Merriweather had her reservations about what the squad would ultimately become. Three seniors would go on to become 1,000-point scorers and the school’s all-time winningest recruiting class. Vogelpohl, Mackenzie Taylor and Symone Simmons were the glue. However, the roster also included underclassmen who would need to learn their roles.

“It was a process and it was a journey. In the beginning the chemistry wasn’t very good and we hadn’t defined roles well,” Merriweather said. “When this group decided that they were going to put aside all their distractions, work really hard for three hours a day, and figure out where their talent could actually take them, that was when we turned the corner as a team. I give all the credit to my great staff, but also these kids who just made the decision to have the chemistry.”

“It starts with a work ethic, it starts with confidence, and it starts with commitment to working together. Just having people here who had actually won that championship made it real,” Merriweather said. “The banners are real, but it’s different when bringing some people back that actually played in that game.”

Next season, the Raiders will return players such as versatile guards Michal Miller and Angel Baker, and the post presences of Tyler Frierson and Teneshia Dixon.

“We’re still extremely talented, we’re still big and fast, and we can still create. All those things are the same if not better, but where we have the biggest hole to fill is in leadership and toughness,” Merriweather said. “People may not realize how important that is, but without those two things, the points and the rebounds and the assists really don’t translate into wins.”

One thing is certain, however — this team was big and did indeed get some really big rings.