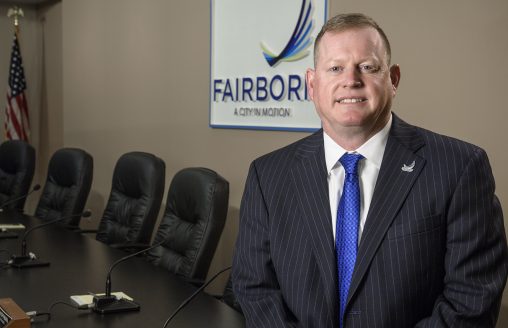 Colin Morrow, who received a master’s degree in international relations and comparative politics from Wright State, is a member of the Fairborn City Council. (Photo by Chris Snyder)

As a former intelligence officer in the U.S. Army Special Forces, Colin Morrow is no stranger to making important decisions under pressure.

Today, the Wright State University alumnus is making those decisions from a seat on Fairborn City Council after being elected to a four-year term in 2017.

“I decided to run because I believed I could bring something to the table to improve the lives of citizens in Fairborn,” said the 51-year-old Morrow. “I want to see more families move to Fairborn and call Fairborn their home.”

Morrow calls Fairborn home even though he moved around a great deal as a boy to follow the career of his father, who retired as a chief master sergeant in the Air Force.

Morrow himself joined the Army after graduating from Kecoughtan High School in Hampton, Virginia, in 1986. “The idea of being out in the field, sleeping on the ground, all that was appealing to me,” he said.

He became interested in Special Forces when he was taking a military intelligence course at Fort Huachuca, Arizona, and befriended several Green Berets. That relationship turned into a 10-year stint in a Special Forces battalion for Morrow and included deployments to Iraq, Uzbekistan, Afghanistan and Macedonia and Kosovo. Special Forces are used for unconventional warfare and foreign internal defense, both of which emphasize language, cultural and training skills in working with foreign troops. Other missions include reconnaissance and counterterrorism, often performed in hostile and dangerous situations.

“That was a fantastic part of my Army career,” said Morrow. “You are forced to operate in ambiguous environments. You have to bring some control to an uncontrolled environment.”

Morrow has been in the Army for 32 years and is currently a colonel and brigade commander in the Army Reserve.

His civilian life has a strong political tint. He graduated from Rutgers University in 1994 with a bachelor’s degree in political science.

“I just enjoy politics. I always found it interesting,” he said.

When Morrow returned from a deployment in Afghanistan, he began pursuing his master’s degree in international relations and comparative politics at Wright State. His master’s thesis was based on his experience in Afghanistan, an analysis of the tribes’ consensus-style, decision-making election process called Loya Jirga.

Morrow’s studies were interrupted when he was deployed to Iraq, but he graduated in 2012.

“The best part of the Wright State program was the professors,” he said. “They gave the students a different perspective when looking at problems. And I use that now.”

He is director of special programs for the Design Knowledge Company, a Fairborn-based defense contractor that provides research, development and engineering services.

Morrow’s Army career and Special Forces experience have made him unafraid of making decisions, political or otherwise.

“If there is only 1% chance of success, I will put 100% behind it to make it happen,” he said. “If you stick to your character and what you believe in your heart, you’re probably not going to go wrong.”