Guest speaker to examine America and the Palestinians 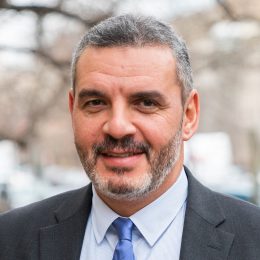 Khaled Elgindy, author and adjunct lecturer at Georgetown University, will be the guest speaker during the Middle East and Islamic Studies Lecture Series at Wright State University.

Elgindy’s lecture will take place Thursday, Oct. 3, at 5 p.m. in 340 Oelman Hall. The lecture is open to the Wright State community and the public.

Elgindy is the author of the newly released book “Blind Spot: Americans and Palestinians from Balfour to Trump.” He is a nonresident fellow in the Foreign Policy program at the Brookings Institution, where he was a resident fellow from 2010 to 2018. The Brookings Institution is a research group in Washington, D.C., that focuses on research and education in the fields of social sciences, foreign policy and economic development. He is also an adjunct lecturer in the Center for Contemporary Arab Studies at Georgetown. Elgindy served as an adviser to the Palestinian leadership in Ramallah from 2004 to 2009 and was a key participant in the Annapolis negotiations held throughout 2008.

Awad Halabi, an associate professor of history at Wright State, administers the university’s minor in Middle Eastern and Islamic studies and organizes the Middle East and Islamic Studies Lecture Series. Halabi said the lecture series has provided students with a unique educational opportunity throughout the past few years.

“The Middle East Lecture Series has hosted scholars and artists from all over the country and globally who specialize on the Middle East and Islam. These lectures have offered the campus community an opportunity to learn about a region of the world beyond what we may only encounter in the media,” Halabi said. “I believe the attraction of these lectures is not just the topics our speakers address but that they are held in smaller settings, providing students an opportunity to engage with the speakers in a very accessible environment.”