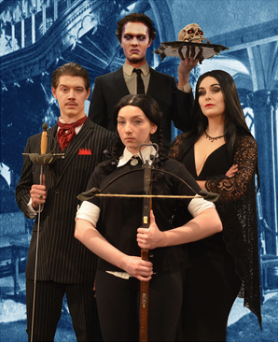 Wright State University Theatre continues its 54th season in the Festival Playhouse with the family-friendly musical comedy, The Addams Family, running from October 31st – November 17th. Toronto Post City proclaimed: “It will entertain you to death!” This Broadway musical inspired by Charles Addams‘s well-known cartoons is sure to delight audiences of all ages – bringing to the stage the beloved, ghoulish American family living in a haunted house with an affinity for all things macabre, featuring an original story: it’s every father’s nightmare.

The Addams Family features Wednesday Addams, the ultimate princess of darkness, who has grown up and fallen in love with a sweet, smart young man from a respectable family- a man her parents have never met. And if that wasn’t upsetting enough, Wednesday confides in her father, Gomez Addams, and begs him not to tell her mother. Gomez Addams must do something he’s never done before- keep a secret from his beloved wife, Morticia. Everything will change for the whole family on the fateful night they host a dinner for Wednesday’s “normal” boyfriend and his parents.

Behind the scenes, The Addams Family is directed by Joe Deer (Crazy For You, You Can’t Take It With You, No No Nanette) with musical direction by Wade Russo (Goodspeed Musicals, Pittsburgh Public Theater, Boston Conservatory). Sets are designed by David J. Castellano, lighting by Matthew P. Benjamin, costumes by Zoe Still, and sound by James Dunlap.

For tickets and theatre information call the Box Office at (937) 775-2500, or purchase single tickets online at http://www.wright.edu/tdmp.

View the original story at broadwayworld.com