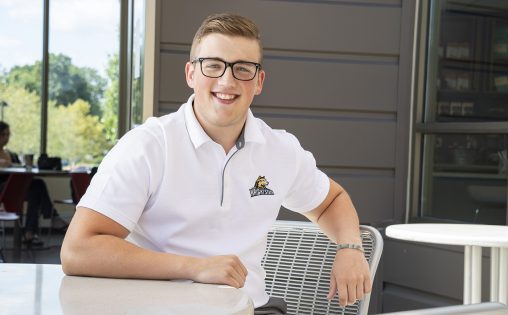 Riley Williams, majors in economics, has a 4.0 GPA, interns at Speedway, serves on the Dean’s Student Advisory Board of the Raj Soin College of Business and is program chair of the Finance Club. (Photos by Erin Pence)

Baling hay is hard, hot work. Riley Williams can tell you that. He can also tell you it gives a person a great appreciation for a college education.

And the junior economics major, who began baling hay at age 14, is making full use of that college education at Wright State University.

Williams has a 4.0 grade point average, interns at Speedway headquarters, serves on the Dean’s Student Advisory Board of the Raj Soin College of Business and is program chair of the Finance Club.

Williams grew up in the nearby farming community of Enon and quickly became accustomed to stacking bales of hay and straw. Dealing with dusty conditions and trying to keep one’s balance on wobbly bales 10 to 15 feet off the ground was the norm.

“I would wake up and go to football practice then put on some jeans and go bale hay,” he said.

In high school, Williams was heavily involved in Future Farmers of America, serving as the chapter’s treasurer.

“That is where I found my yearning for leadership — through the various career development events our chapter participated in,” he said.

Following graduation in 2017, Williams enrolled at The Ohio State University to study agricultural business. But he quickly learned that he wasn’t comfortable with the school’s large size and campus lifestyle.

He also discovered that he wanted to study economics after taking Principles of Microeconomics, which examines the behavior of companies that make decisions about the allocation of scarce resources. 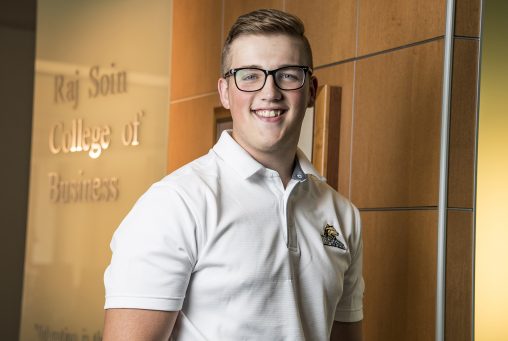 Riley Williams transferred to Wright State as a freshman and immediately felt like he had a place in the university community.

So after one semester, Williams transferred to Wright State, in the spring of 2018.

“I knew Wright State was a great school and I wanted to come back home anyway,” he said. “It’s working out great for me. It’s definitely one of the best adult decisions I’ve made thus far.”

Williams says he loves the sense of community at Wright State.

“I would want to splash that everywhere,” he said. “I didn’t feel like I belonged at Ohio State, but Wright State makes you feel like you belong as soon as you get here. It’s easy to get involved, too. It’s a very inclusive environment.”

Williams is currently a marketing intern at Speedway, the nation’s second largest company-owned and operated convenience store chain, with about 4,000 stores in 36 states.

“Speedway has a really good marketing analytics department,” he said. “It’s definitely preparing me for the fast pace of the business world.”

Following graduation, Williams wants to either pursue a law degree or earn a master’s degree in economics.