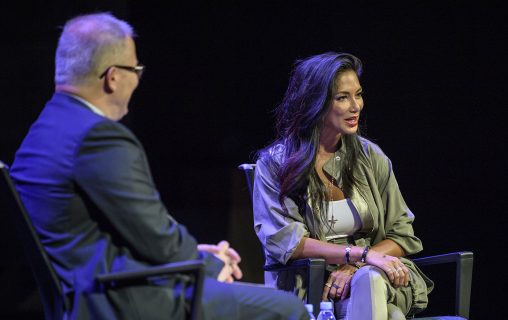 Nicole Scherzinger, who studied acting and musical theatre at Wright State, sang the National Anthem before the first game of the World Series. She is pictured on the Festival Playhouse stage during a 2018 talk she gave to Wright State performing arts students.

Nicole Scherzinger, who studied acting and musical theatre at Wright State, sang the National Anthem before the first pitch between the Washington Nationals and Houston Astros in Houston on Oct. 22.

Joe Smith, a relief pitcher for the Astros who starred on Wright State’s baseball team, pitched the ninth inning against the Nationals, giving up no hits and getting a strikeout.

The Grammy-nominated Scherzinger has accrued No. 1 singles on both sides of the Atlantic, selling 37 million singles worldwide, including 16 million records as a solo artist and 54 million albums as the lead singer of the Pussycat Dolls.

As a theatre student at Wright State from 1996 to 1999, she performed in numerous productions, including “Chicago” and “Show Boat.”

She received the 2017 Alumna of the Year Award from the Wright State Alumni Association.

Smith enrolled at Wright State without a scholarship and became the baseball team’s closer, developing a sidearm delivery.

He was selected by the New York Mets in the third round of the June 2006 amateur draft and reached the majors in 2007. He later played for the Cleveland Indians, Los Angeles Angels, Chicago Cubs and Toronto Blue Jays before arriving in Houston.

The 35-year-old right-hander’s 782 regular-season appearances had been the most for an active pitcher without a World Series game before he appeared in Game 1, which the Nationals won 5-4. 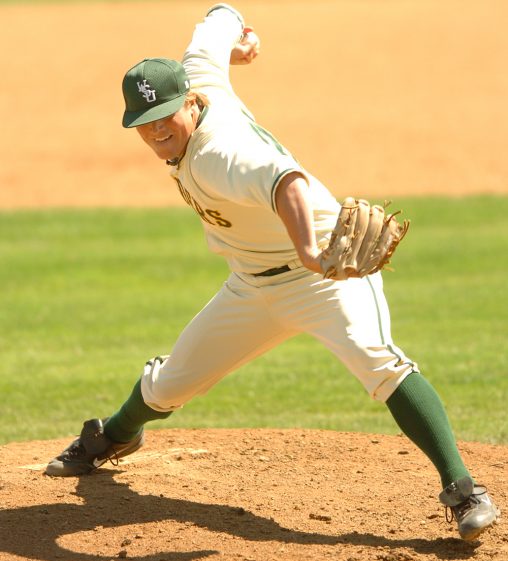 Joe Smith, who starred on Wright State’s baseball team, made his first World Series appearance as a relief pitcher for the Houston Astros.

He made six appearances in the AL Division Series and ALCS, all in critical situations, totaling 3 2/3 innings. His lone blemish was a solo homer he yielded to New York Yankee Gleyber Torres in the eighth inning of Game 3 of the ALCS. Otherwise, Smith held opponents scoreless, including a clean eighth inning during the Astros’ 6-4 win over the Yankees in Game 6 that clinched the AL pennant.

Scherzinger has made a name for herself on the West End stage, earning a nomination for a Laurence Olivier Award for her performance as Grizabella in a revival of “Cats.” Andrew Lloyd Webber called her recording of “Memory” the “best recording of anything of my music ever done.”

Scherzinger starred in the acclaimed musical “Rent” at the Hollywood Bowl in Los Angeles, for which she received rave reviews, and performed with acclaimed Italian classical tenor Andrea Bocelli part of the PBS “Great Performances” series. She was also featured on Paul McCartney’s U.N. Foundation charity single “Love Song to the Earth.”