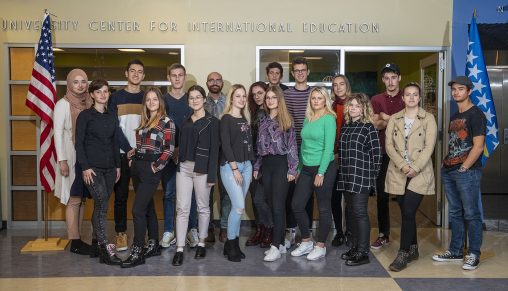 Students from Bosnia and Herzegovina learned about various programs and the admission process for international students during a visit to Wright State.

Students from Sarajevo, Banja Luka and Mostar spent the morning at Wright State on Oct. 28.

They toured the campus, making stops at Dunbar Library and the Tom Hanks Center for Motion Pictures before attending presentations at the University Center for International Education (UCIE) in the Student Union.

The three-week visit was funded by a grant awarded to the Dayton Sister City Committee. More than 250 students in Bosnia and Herzegovina applied for the 18 spots.

Following the visit, the students are required to come up with a project that benefits their communities at home.

“The goal here is for us to introduce them to some democratic concepts and also do some relationship-building,” said Arch Grieve, mediation specialist with the Dayton Mediation Center and a volunteer with the Dayton Sister City Committee.

The students represent Bosnia’s three ethnic groups — Bosniaks, Serbs and Croats. The students arrived in the United States on Oct. 7 and returned to Bosnia on Oct. 29.

They visited City Hall in Dayton and met with Wright State alumna and Mayor Nan Whaley and other city government officials. They attended a mock trial at Dayton Municipal Court, volunteered at The Foodbank and visited Welcome Dayton, which promotes immigrant integration. They also toured the Ohio Statehouse in Columbus and spent four days in Washington, D.C.

The students also made stops at Wright State, the University of Dayton and Sinclair Community College.

“We wanted to introduce them to different schools around here because a lot of them might come back and study here one day,” said Grieve, who earned his bachelor’s degree in social science education and his master’s in international and comparative politics at Wright State.

At UCIE, the students learned about various programs and the admission process for international students.

“You can tell they are selected for leadership,” said Michelle Streeter-Ferrari, director of UCIE. “They seem to have an idea of what they want from life and what they want to do. They seem very mature and very driven.”

The students heard presentations from Laura Luehrmann, professor of political science and director of the Master of International and Comparative Politics Program; and Jennifer Subban, an associate professor of urban affairs and geography and a Frederick A. White Distinguished Professor of Professional Service.

Luehrmann discussed democracy and international relations. Subban told the students about her leadership program in South Africa, which is designed to foster dialogue between students in both countries.

Streeter-Ferarri said the visit was a chance to showcase Wright State and what it has to offer to potential students and enable them to engage in dialogue with Wright State faculty.

“And we’re learning about Bosnia as well,” she said. “It’s not just about teaching; it’s about learning.”

Marko Velimirovich, 17, of Sarajevo, said the chance to visit the United States was very appealing to him.

“Our generation grew up on Western culture,” he said. “It is also a leadership program, which I think is very important to develop because we don’t have a lot of projects like that back home. And it was an opportunity to meet kids from other cities, from other ethnic groups back home.”

Velimirovich, who is thinking of eventually going to law school, said he enjoyed everything about the experience and learning how Americans think and deal with problems. He said American college students seem motivated to share ideas, communicate with each other and work together.

“And they are also educated in a way that they can be ready for what’s waiting for them out there,” he said.