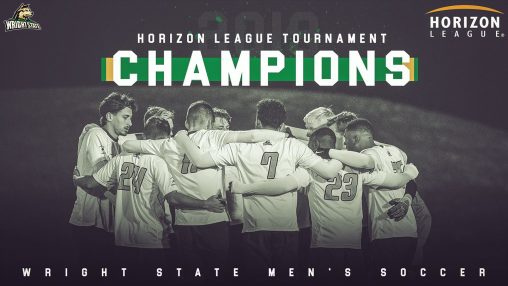 For the first time in program history, the Wright State men’s soccer team is headed to the NCAA Division I soccer tournament after the Raiders defeated the Milwaukee Panthers 4–3 in penalty kicks to win the Horizon League tournament on Nov. 16.

Deri Corfe broke the 28-minute scoreless drought as he fired in a shot from beyond the box for the first goal of the contest and his 13th of the season. The Raiders remained in control for the rest of the first half.

Just five minutes into the second half, Milwaukee’s Paolo Gratton connected on a pass from Evan Conway to tie the contest at one all.

Though both teams battled through 90 minutes, that wasn’t enough as the Horizon League championship headed into golden goal overtime. Two overtime periods were not enough to crown a champion, and the match headed to penalty kicks to decide a champion.

Milwaukee was first to the penalty line and to convert, taking a 1–0 lead. Wright State headed to the line for the team’s first, ultimately missing. The Panthers took to the line; converting again and going up 2–0 before Wright State took to the line and found the back of the net. Joel Sundell came up big for the Raiders as he stopped the next two rounds of Panther penalty kicks before the Milwaukee made its final kick of the night.

Wright State converted on the remaining four penalty kick attempts, with Jackson Dietrich connected with the back of the net on what would be the Raiders’ game-winning penalty kick. The contested ended in favor of Wright State, 4–3.

On Monday, Nov. 18, the Raiders will find out where and who they will play in the NCAA Division I Tournament.