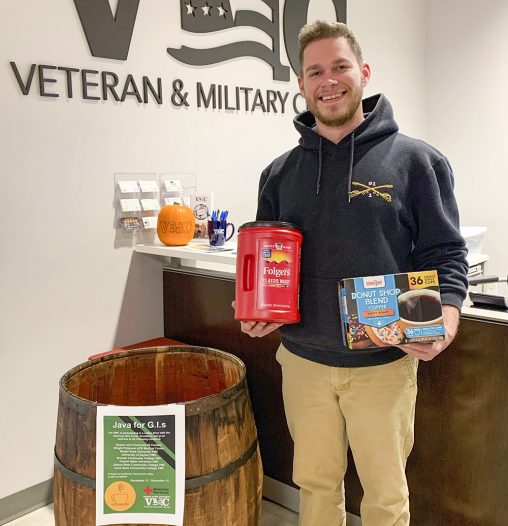 David Berry, a Wright State graduate student and Army combat veteran, is coordinating the Java for GI’s coffee drive, a partnership of the Veteran and Military Center and the Dayton Red Cross.

Once again, the Veteran and Military Center (VMC) at Wright State University is teaming up with the Dayton-Area Chapter of the American Red Cross to collect coffee for area veterans and active duty service members. Coffee donations can be dropped off at the VMC in 131 Allyn Hall through Dec. 12.

David Berry, an Army combat veteran and Wright State graduate student studying public administration, is coordinating the Java for GI’s project for Wright State’s VMC. He also earned his bachelor’s degree in organizational leadership from Wright State and is familiar with the valuable services and camaraderie the VMC offers.

“The veteran and military centers fill a niche in our community, especially for vets that are returning and using their GI Bill benefits,” said Berry. “We want veterans to be welcomed with a cup of coffee when they go into these centers or other veteran organizations.”

Berry, who served in Afghanistan from 2012 to 2013, has worked in the VMC since 2016. He was recently awarded the VMC Champion Award for his dedication and loyalty, and being a “jack of all trades.” He is a peer advisor and former coordinator of the center’s Veterans’ Voices project.

K-cups are preferred, but packages of ground coffee will also be accepted in the Java for GI’s coffee drive. Donated coffee will be given to the following organizations:

“This is the easiest way to say thank you to a veteran: buy them a cup of coffee,” said Seth Gordon, VMC director and a member of the Board of Directors of the Dayton Red Cross.

Coffee also may be dropped off at the Red Cross Dayton office, 370 W. First Street in downtown Dayton.

Wright State’s Veteran and Military Center is dedicated to supporting veteran and military-connected students in reaching their educational and professional goals. It provides a supportive environment as students transition from the military to college and from college to career. The VMC includes study spaces, meeting rooms, as well as a kitchen where students can grab a cup of java.