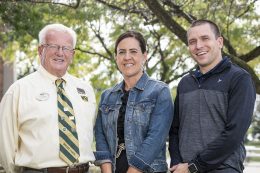 They’ve raised chickens. They’ve grown vegetables. And along the way the juveniles on probation have learned discipline, responsibility and the importance of community.

It is all part of the Ripple Project, a partnership between the Wright State University–Lake Campus, the justice system and several agriculture organizations.

“It’s really about getting kids to get invested in their community,” said Jennifer Contreras, a probation officer for the Mercer County Juvenile Court. “It is changing kids’ perception of themselves and their surroundings.”

The two-year-old Ripple Project is part of Mercer County’s Expanding Horizons program. It is a collaboration between the Lake Campus, Mercer County Juvenile Court, the 4-H Department of Agriculture, the Ohio State Extension Office and the Mercer County Fair Board.

The seeds for the project were planted in 2018 by Aaron Rose, alternative school principal for Mercer County’s Educational Service Center.

Rose, who graduated from the Wright State Dayton Campus in 2001 with a bachelor’s degree in education, worked closely with juvenile probation and would build relationships and get jobs for juvenile offenders. He grew up on a farm and believed that farming taught discipline, responsibility and motivation.

“He was very forward-thinking,” said Contreras.

But just before the Ripple Project could get launched, Rose tragically died in a car accident. He was the inspiration for the naming of the Ripple Project, after the ripples in a pond created by a single pebble.

“You don’t realize how impactful you are,” said Contreras.

With help from Greg Homan, associate professor of agriculture and organizational leadership at Lake Campus, seven juveniles on probation ages 14 to 18 raised 25 broiler chickens at the fairgrounds in the summer of 2018.

The youths raised the chickens from chicks. Twice a day they would feed and water the animals and clean their stalls. They also debeaked the chickens and occasionally bathed them and cleaned their nails.

“The kids learned all of it,” said Contreras. “It was a lot of work, but they enjoyed it.”

After the chickens were shown at the Mercer County Fair, they were donated to 44 needy families through the C.A.L.L. Food Pantry.

The following year, 10 juveniles on probation grew produce in gardens at the fairgrounds under the direction of Kip Wright, the Lake Campus conduct officer. The youths planted, watered and harvested. The six raised beds produced 546 pounds of potatoes, carrots, beets, tomatoes, squash, zucchini, cucumbers, green beans and potatoes. The produce was donated to the food pantry and given to the elderly and shut-ins.

As part of the Ripple Project, the juveniles also went on field trips, touring Lake Campus and various farms.

Contreras said the project has taught the juveniles teamwork, respect and given them a sense of pride. She says it is changing lives.

“I don’t know the immediate effects, but I know that down the road it will make kids think,” she said. “It’s making them aware of what’s going on in their local community and in the world.”

Contreras earned her bachelor’s degree in crime and justice studies from Wright State and worked as a probation officer in Montgomery County for 11 years before moving back to Mercer County.

She says juveniles placed on probation are more likely to stay and raise their families in the community rather than moving away.

“We need to focus on those kids who are going to stay here,” she said.

Contreras said many juveniles on probation typically feel like throw-away kids, that no one cares about them.

“Our kids don’t feel like throw-away kids anymore,” she said. “They understand that the community cares about them.”