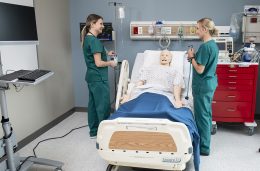 The Wright State University-Miami Valley College of Nursing and Health has been named one of the nation’s top nursing schools by Nursing Schools Almanac.

The college is ranked No. 16 in Ohio and No. 80 in the entire Great Lakes Region for 2019. The almanac collected data on more than 3,000 institutions, and 20 percent made the list of the best nursing schools in each geographic region.

The Nursing Schools Almanac provides aspiring nurses with a detailed, comprehensive and analytical resource for selecting their future nursing school.

The almanac assessed schools based on academic prestige and perceived value, including professional designations, grant funding for nursing research, number of years in operation and graduates’ ability to repay student debt in a timely manner. The almanac also took into account the breadth and depth of the nursing programs, including program size and the number of degrees, diplomas and certificates.

Wright State’s College of Nursing and Health was ranked the No. 3 accredited nursing school in Ohio for 2019 by Nursingprocess.org.

Wright State’s baccalaureate and master’s degrees in nursing are accredited by the Commission of Collegiate Nursing Education. The pre-licensure programs have full approval from the Ohio Board of Nursing.