No doubt about it 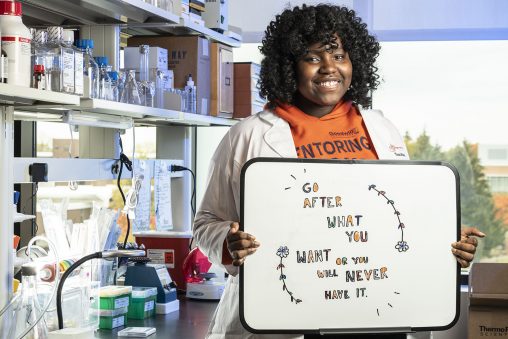 Learning how to conduct scientific research in a college lab is an acquired skill. Wright State University biology student Tara-Yesomi Wenegieme acquired it in a hurry.

Wenegieme began working in the lab of renal physiologist Clintoria Williams less than a year ago with no prior experience.

Last September, Wenegieme won a scientific poster presentation award for her research work at the annual Ohio Physiological Society conference, a statewide competition that pitted her against students with far more training.

“She is able to generate data, understand a project and compete on a level with graduate students and postdocs who have had years of research experience,” said Williams, an assistant professor in the Boonshoft School of Medicine and the College of Science and Mathematics as well as director of the Small Animal Physiology (SAP) Core.

Wenegieme is part of a Williams-led team of researchers who have helped linked zinc deficiency to high blood pressure. High blood pressure, or hypertension, can increase the risk of serious health problems, including heart attack and stroke. Zinc, a trace element highly concentrated in the pancreas, helps the immune system fight off invading bacteria and viruses.

“For me it’s very important because as an African American hypertension is more prevalent,” said Wenegieme. “I think it’s really important to investigate and see how we can make a change.”

Wenegieme worked hard in the lab — putting in long hours that would sometimes stretch to 10 p.m. — in order to make sure she was getting her data right.

“In the past, I struggled a lot with self-doubt,” she said. “To me it shows that if you put your mind to whatever you do you can be successful.”

Born in New York City, Wenegieme later spent five years in Nigeria, her mother’s native country. At age 10, Wenegieme and her family returned to the United States and settled in Ohio. Her mother works as a nurse in a Dayton-area nursing home.

From seventh through 12th grades, Wenegieme participated in Wright STEPP. The program was designed to increase the number of students from public schools in Dayton and Springfield who graduate from high school with the academic skills to earn their bachelor’s degrees in science, technology, engineering or math.

“It gave me an insight into what Wright State would look like and I got interested in it,” Wenegieme said. “It made me really want to pursue Wright State.” 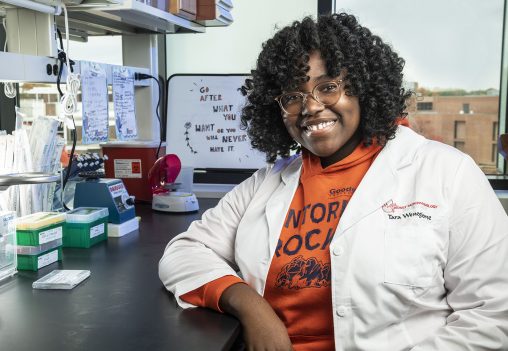 Wenegieme became interested in biology during her junior year at Meadowdale High School and was especially intrigued with DNA.

“Then I looked at what majors are best suited for becoming a medical doctor, and biology was one of them,” she said. “So it made me want to pursue it even more.”

Wenegieme enrolled at Wright State after graduating from Meadowdale in 2016 to pursue biology. But she got off to a slow start.

“When I took my first bio class I didn’t do really well on my first exam as well as in the lab,” she said.

Wenegieme sought help from tutors and got involved in the Applying Scientific Knowledge (ASK) program in the College of Science and Mathematics. Under the ASK model, undergraduate students take a research methods course and then conduct research in teams.

Wenegieme was off and running.

“Wright State opened my eyes as to what I want to do and accomplish in this life,” she said. “My goal is to become a doctor, but working in the lab has made me realize I also really want to do something lab-based, possibly in pathology.”

Williams said Wenegieme’s success in the poster competition at the Ohio Physiological Society conference has built up her confidence.

“So now she sees her potential,” said Williams. “I think she understands that everything she needs to be successful is already in her.”