The art of space 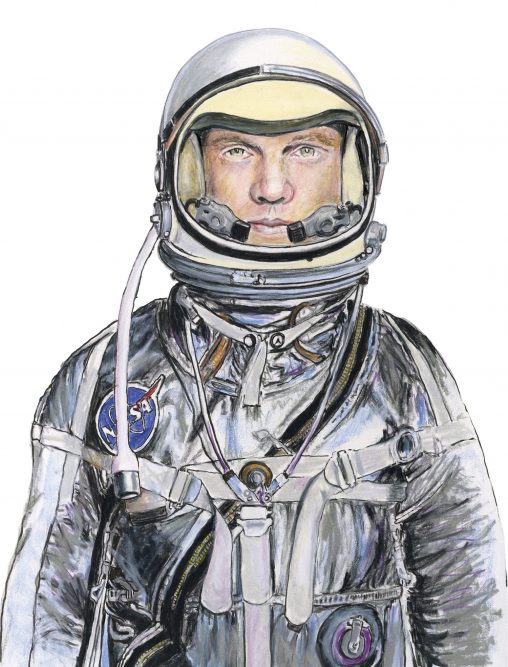 Michelle Rouch ’92 can find inspiration in the most unusual places. Her successful series of paintings included one idea formed in the restroom of a restaurant. Rouch was furloughed from her engineering job during a federal government shutdown. Although her husband, Fotios Rouch ’91, who was also furloughed, was having fun with his model airplane hobby, Rouch was miserable. “I felt like I was fired,” she said.

While having breakfast with a friend, Rouch excused herself and found art decorating the restroom walls featuring what she described as “ridiculous 1950s models” in McCall-style outfits.

“I looked at them and said, ‘You gals need astronaut suits,’” Rouch recalled.

“There are times when my engineering world is so strange that my art reflects the strangeness of my life,” Rouch said.

Rouch, who lives near Tucson, Arizona, has a thriving career as an artist specializing in aeronautical and aerospace subjects. She uses her art to support causes and groups important to her and to promote STEM education to kids.

She has been nominated for the Arizona Governor’s Arts Award several times and has received the American Institute of Aeronautics and Astronautics Harry Staubs STEM K–12 Outreach Award.

Her work has appeared in dozens of exhibitions in such diverse settings as universities, airports, aviation conventions and festivals, and air and space museums. Her painting commemorating the 50th anniversary of the Apollo 9 mission appeared in the 2019 International Aerospace Art Exhibition at the National Museum of the U.S. Air Force. She was also asked by the museum to help organize a space art exhibition for the summer of 2020.

Rouch has created art since childhood but does not have formal training. Her background is in electrical engineering; her non-artistic career included work for the Department of Defense as a contractor.

Her love of aviation and space combined with her engineering expertise give Rouch a unique perspective.

“Engineers are artists and artists are engineers because we’re all developing and designing things that don’t exist yet,” she said. “We’re all abstract thinkers. We’re designing the unknown.” 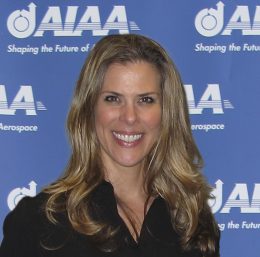 Wright State electrical engineering grad Michelle Rouch has turned her love for science and aviation into a career as a professional artist.

“It’s like the curvature on the moon. We don’t want the moon to be an oval. We need it to be exact, to be a curve,” she said. “In between the lines I am as creative as possible. Sometimes I’m very technical and sometimes I’m very loose.”

For Rouch, art has always come naturally. In kindergarten, she remembers having the ability to draw lifelike objects. “I knew at that time I was different,” she said. “I feel I was a born artist.”

She drew and painted constantly as a kid, filling up tablets and reams of paper with portraits or nature scenes. She would get in trouble because her schoolwork was covered with drawings—a fact she said she kept from her son, who is now 22, for a long time. “I would make sure he would do his schoolwork,” she said. “I didn’t want him to know [his] mom didn’t do well.”

After graduating from Archbishop Alter High School, Rouch enrolled at Wright State, initially intending to major in fine art. But she switched her major to electrical engineering at the suggestion of her father and older brother, whom she helped with math lessons while he studied engineering at another local university.

“Math came very easy for me,” she said. “I dreamt math. I would wake up and know the answers to equations.”

Rouch appreciated the economic value of a Wright State education and the hands-on opportunities provided through the College of Engineering and Computer Science. As a student, she participated in a co-op at Wright-Patterson Air Force Base.

“Having that hands-on work allowed me to have a résumé to be more competitive,” she said.

She also appreciated the support she received from the Office of Disability Services, which helped her after she was diagnosed with an auditory disability. She was able to take tests in soundproof rooms and learned she should sit in the front of her classes to better hear her instructors.

Though she was no longer majoring in art, Rouch did not completely abandon her creative ambitions. She had an artistic breakthrough during an engineering technical drawing course—in which she also met her husband, Fotios, who earned a human factors engineering degree.

“Engineering drawing clicked for me,” she recalled. “I started looking at art on a different level.”

In her last quarter at Wright State, she also allowed herself to be creative by taking a fine art drawing class. The instructor challenged Rouch to improve her focus.

“She knew I had an ability,” Rouch said. “She needed to push me—I appreciated it.”

After graduating in 1992 with a bachelor’s degree in electrical engineering, Rouch started working for the U.S. Army at Fort Huachuca in Arizona. She left the Army in 1999 and now works for the Defense Contract Management Agency in Tucson. She has worked for more than 20 years as a lead systems engineer working on weapons systems.

Starting her engineering career also gave Rouch the time to work on her art—but as a hobby at first. “I started really developing the skills,” she said.

Rouch started focusing on aviation and aerospace art almost by accident. Early in her career, she focused on murals and portraits, especially portraits of her son after he was born in 1997. During a period of artist block, Fotios, a serious airplane modeler, suggested she draw airplanes to try something different. She followed his advice, drawing her son walking toward an airplane at a museum in Tucson.

Inspiration struck and Rouch began creating airplanes, eventually expanding into aerospace subjects. After she started painting airplanes, Rouch decided she was ready to take a big step and display her work publicly. Rouch and Fotios had stable careers, so she knew she would be able to take her art career more seriously.

She joined the American Society of Aviation Artists, a nonprofit organization that fosters art through the history of aerospace, and created her business, Artwork by Rouch. “That moment I knew I was serious about art,” she said.

Rouch uses her artwork to promote science and engineering and support causes that are important to her, raising over $150,000 over the last eight years. She has supported the Experimental Aviation Association, an international organization of aviation enthusiasts based in Wisconsin; Kitty Hawk Air Academy, a nonprofit that introduces children to aviation; Wright Flight, a Tucson organization that works with schools to introduce kids to flying; and the Tucson chapter of the International Association of Astronomical Artists, which she founded.

At the 2019 Kitty Hawk Air Academy Living Legends of Aviation ceremony in Los Angeles, Rouch made headlines for auctioning off her painting depicting Amazon founder Jeff Bezos flying in space. She created the painting “Space-cation” to encourage people to think about having a fun vacation in space.

Money was tight for Rouch’s family when she was in high school and while at Wright State. Now that she is successful and lives a comfortable life, she wants to give back by using her talents for community service.

“There were a lot of people who believed in my ability because they saw something in me that I couldn’t see in myself,” she said. “It’s now my job to help others.”

Part of Rouch’s message to young people is to be open minded about both STEM and the arts and humanities when considering their futures.

“When kids think they have to choose the arts versus the sciences, I tell them to embrace both,” Rouch said. “Kids should not choose between the arts and technical. They should adapt both and become strong in both and realize one supports the other. The technical helps me with my art.”