To vote is not enough

Digging into the collection of Dayton suffragette Katharine Kennedy Brown 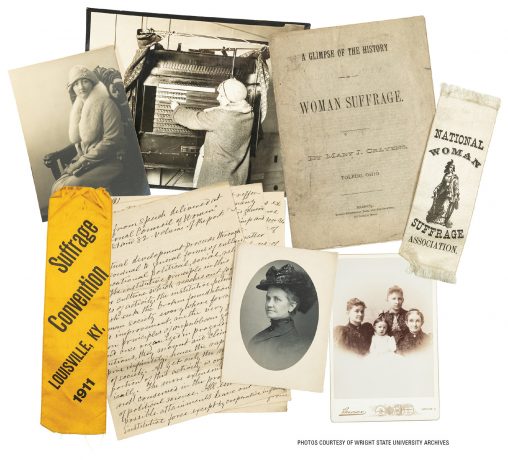 By Dawne Dewey ’80, ’84
Head of Special Collections and Archives

Daytonian Katharine Kennedy Brown once said, “To vote is not enough. We must first study our history and its Constitution, second, political organization, and then to the polls armed for combat.”

Brown put her words into action. She voted for the first time in 1920, the year the 19th Amendment to the U.S. Constitution was ratified, granting women the right to vote. She was 29.

Though born into a family of wealth and privilege, Brown didn’t act the part. She used it to serve her community and educate others on the power of the vote. Martha McLellan Brown, her mother-in-law, was a leader in the women’s suffrage movement, along with Elizabeth Cady Stanton and Susan B. Anthony.

Women’s suffrage was a very important issue to Brown. She helped build the Montgomery County Women’s Ward and Precinct Organization in 1920 and the county’s first Women’s Republican Club. Brown served in leadership roles with the Dayton chapter of the American Red Cross, the Daughters of the American Revolution, The Dayton Art Institute, and the Junior League of Dayton, among others.

Brown worked tirelessly for the betterment of women, both in the community and in the political arena. She believed that to vote and to give one’s time and energy was the duty of every American citizen. In 1928, she became a member of the Republican State Committee of Ohio, a position she held for 40 years. Brown was advisor and confidante to numerous presidents, congressmen, and governors.

In a speech, “The Junior League Girl and Politics,” written early in her career, she said: “The 19th Amendment gave women nationwide suffrage, and by the same stroke, a tremendous power with unascertained possibilities was unleashed. We have the vote. Whether we want it or not is no longer of consequence. The obligation is the same, for the 19th Amendment is the law…become aware of the great good you can do—of the importance of starting tomorrow to show your colors. And not just in politics, but in all areas of life, to help your fellow citizens in any way you can.”