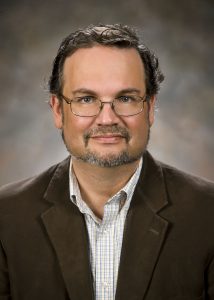 Paul Lockhart, professor of history at Wright State University, will receive the 2020 Distinguished Historian Award from the Ohio Academy of History.

Lockhart will be recognized by the Ohio Academy of History at the organization’s annual conference at The Ohio State University in September when he will give the Distinguished Historian Lecture.

The Distinguished Historian Award from the Ohio Academy of History honors a historian with an extensive record of publications and contributions to the profession.

In his lecture, titled “A Scandinavianist’s Lament: Why Nordic History Matters,” Lockhart will discuss why historians neglect the story of Scandinavia and why they shouldn’t.

“Scandinavian history is still my passion, especially the history of Denmark when it was a major power, roughly from 1550 to 1650,” he said.

In the 1500s, 1600s and early 1700s, Scandinavian countries were powerful and influential, Lockhart said, but how they gained that power and prestige then quickly lost it is rarely taught.

“I think it’s especially relevant today, when we’re constantly drawing political lessons from, and parallels with, the Scandinavian social democracies — but we tend to do so without fully understanding the historical context of present-day Denmark, Norway, Sweden, Iceland, and Finland,” he said.

Lockhart was the Brage Golding Distinguished Professor of Research at Wright State for 2014-18, in recognition of his distinguished scholarship in American military history and early modern Scandinavian history. He is the founder and director of the graduate and undergraduate programs in the history of war and society.

As Senior Fellow with Wright State’s CELIA, he helped organize a series of events in 2014–15 commemorating the 100th anniversary of the start of World War I. He also coordinated an exhibition, “Dayton in the Great War,” at Carillon Historical Park in 2016.

Lockhart has held prestigious fellowships from the American Council of Learned Societies and the Society for the Advancement of Scandinavian Study, has been a guest lecturer at the University of Southern Denmark, and served as a National Endowment for the Humanities Visiting Distinguished Professor at SUNY Potsdam.

He is the author of six books including “Denmark in the Thirty Years’ War, 1618-1648: King Christian IV and the Decline of the Oldenburg State,” “The Drillmaster of Valley Forge: The Baron de Steuben and the Making of the American Army,” “The Whites of Their Eyes: Bunker Hill, the First American Army, and the Emergence of George Washington.”

Lockhart is now writing about a Danish murder case from the early 1600s. The case involves a Lutheran parson, who was executed for a murder that probably never happened, and his grown son, who later uncovers the details of a plot to frame his father to his death, and then manages to bring most of those responsible to justice.

“It’s a very grim tale, but it also tells us a lot about how people in the 1600s thought of justice, truth and God’s role in everyday life,” Lockhart said.

He is also working on a history of the New Sweden colony, which was founded along the Delaware River Valley in portions of modern-day Pennsylvania, Delaware and New Jersey from 1637 to 1655. Lockhart is examining why Sweden — a major military power in the mid-1600s — “was unable to keep a foothold in North America for two decades? Why did New Sweden fail where the English colonies succeeded?”