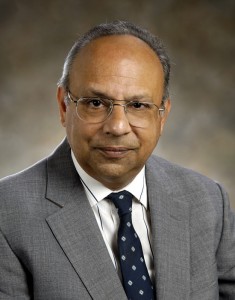 Govind Bharwani is director of Nursing Ergonomics and Alzheimer Care at the Nursing Institute of West Central Ohio and co-director of ergonomics at the Wright State College of Engineering and Computer Science.

Wright State University research designed to stimulate the minds and memories of Alzheimer’s patients through the use of family photos, music and puzzles has won a $15,000 grant.

The Nursing Institute of West Central Ohio will receive the grant from the AMDA Foundation/Pfizer Quality Improvement Selection Committee to help support the research by Govind Bharwani.

Bharwani is director of Nursing Ergonomics and Alzheimer Care at the Nursing Institute of West Central Ohio and co-director of ergonomics at the Wright State College of Engineering and Computer Science.

Bharwani also won the Dorland Health Silver Crown Award for his work for his work with the Behavior Based Ergonomics project, which Dorland Health’s “Case in Point” magazine called a ” boon to the health and well-being of senior patients.”

Alzheimer’s is a brain disease that causes problems with memory, thinking and behavior.

Working with his daughter, consultant Meena Bharwani, Bharwani is developing a system of “interventions” that can be used by caregivers to help patients ease their boredom, stimulate their minds and reinforce their memories.

Using the Bharwanis’ system, the staff at St. Leonard Living Community’s Alzheimer’s unit customized a set of interventions to use with each resident as that person became bored and disengaged. The interventions were keyed to the personalities, cognitive abilities and preference of individual residents.

For each resident a “memory box” was set up with family photos and other items the residents found enjoyable. Also kept on hand were music CDs, television programs on DVDs and simple puzzles and games.

Officials and family members say residents appear happier and more relaxed after the system is used.

The AMDA Foundation/Pfizer QI Awards are part of a program designed to encourage the development of innovative projects that help make a distinct impact on the quality of long-term care. More details of Bharwani’s work can be found at http://www.wright.edu/nursinginstitute/articles/newsstorybharwani.html