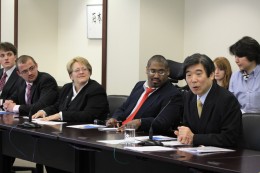 On the second day of the national Model United Nations conference, students on the Wright State team had an experience they will carry with them for the rest of their lives:

A rare sit-down meeting with the Japanese Ambassador to the UN himself, Kazuo Kodama.

“It is fairly standard procedure to ask the mission we represent to take a meeting; sometimes the ambassador comes and sometimes not,” said Vaughn Shannon, Ph.D., and first year faculty adviser to the Model UN team.

Ambassador Kodama met with the Wright State team of 35 students and two faculty advisers for over two hours, well over what the team expected.

“What was particularly amazing was that he spent an incredible amount of time with us, and not just willingly but energetically,” said Shannon.

“They put a lot of thought into their time with us and gave us copious notes on our paper and speeches regarding Japanese foreign policy.” 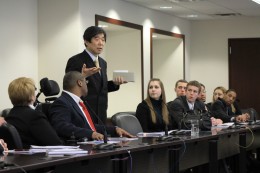 Mission of Japan/CONRAD Holding a gift from the Wright State Model UN students during his closing remarks, the Japanese Amabassador compared the people of Japan to the resilient bamboo trees that grow in his country.

Donna Schlagheck, who has been the primary faculty adviser on the team for 26 years, noted, “He was so generous with his time. I don’t ever recall an ambassador turning to me in a briefing and asking, ‘do you have more time?’”

During the national conference, the team demonstrated its knowledge of Japan’s foreign policy so well they were recognized as having an outstanding delegation and position paper.

It is the 32nd consecutive year the Wright State team has received the honor for the latter.

Students from four of the 16 committees were also recognized as outstanding delegates.

But the sweetest compliment may have come from Ambassador Kodama himself.

“He said we really knew our stuff,” said Vaughn.

The Wright State team was allowed to send questions in advance.

When responding to one of the questions, Ambassador Kodama remarked, ‘This is an expert question.”

One of the advance questions was about the international impact of the nuclear issue caused by the recent earthquakes.

Amabassador Kodama responded to that question specifically saying, “TEPCO failed to plan for this level of impact. We (Japan) do not want to remake the same mistake in the future.”

“We did send condolences messages after the earthquakes and set up a small earthquake relief fund in New York. We contributed to it and encouraged others to contribute to it. We told him and he said he was honored,” said Shannon.

When the meeting was wrapping up, Schlagheck says Ambassador Kodama closed with a “quintessential Japanese” remark about the ongoing recovery in his country and the need for healthy foreign relationships to aid in that recovery:

“Japan’s favorite tree is the bamboo tree. It grows tall and powerful towards the heavens, ever reaching for greatness. But in the north of Japan it snows. In the winter, the weight of the snow can wear down on the bamboo, making the bamboo tree bend to touch the ground. But after the spring thaw and the weight is lifted, the bamboo rises once again to reach for the heavens. We bend but never break. We are resilient.”