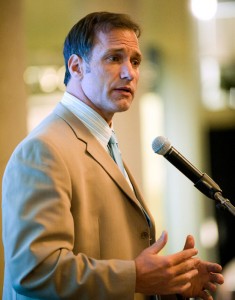 Chris Spielman was the keynote speaker for the annual Wright State University Academy of Medicine dinner.

“Never ever, ever use my death as an excuse for anything but motivation for everything.”

Facing a home movie camera and delivering the message with a steely strength—though her body had been ravaged by cancer—that was the message Stefanie Spielman wanted her family to carry with them after she was gone.

“The main purpose of tonight is to raise funds to help provide scholarships and low-interest loans to our students,” said Dr. David Roer, pediatrician and chair of the Wright State Academy of Medicine.

Spielman, who lost his wife, Stefanie, to cancer November 19, 2009, shared his story with an audience of nearly 200.

“It’s a story I wish I didn’t have to tell, but it’s a good story and a love story,” said Spielman.

Spielman grew up playing football. Since the age of 4, he pursued the sport with a laser-like intensity. His father was a football coach. When Spielman’s friends went to Florida for spring break, he went to football camps.

Spielman starred at Ohio State as a linebacker. He had one girlfriend, Stefanie, his high school sweetheart. He married her in his early 20s.

Spielman was drafted by the Detroit Lions and realized his lifelong dream of playing in the NFL. But a few years later, when he was playing for the Buffalo Bills, his wife was diagnosed with breast cancer. A golf ball-sized lump was discovered in her breast.

“It felt like I had been hit over the head with a baseball bat. It drops you to your knees,” said Spielman.

As they were driving to the doctor’s office, Spielman says at a stoplight he pounded the window and interior of his car in a rage, asking “How could this happen to us?”

Spielman said his wife became angry too, but with him—for forgetting all the blessings their family had already been given. 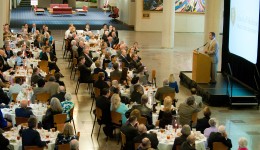 Spielman, who lost his wife, Stefanie, to cancer in 2009, shared his story with an audience of nearly 200.

She also never wavered during her 12 years battling the disease in her call to action for others to find their passion; a mission, Spielman says she called it, to make a difference and make a life count.

Hers was to spread awareness of breast cancer and spread the message to fight.

Spielman, who was trying to make a comeback from a serious spinal injury at the time, walked away from football to care for his wife.

Spielman says battling the cancer was hard, but watching his wife’s strength gave him strength, even in her death.

Spielman professed his love for doctors many times at the dinner, but each time reminded them and the medical students in the crowd, of their responsibility to serve their patients.

“I think you’ve been given a tremendous gift—a gift to serve, a gift of knowledge, will and determination to have an impact on people’s lives day in and day out,” said Spielman.